Vatican Radio’s Tracey McClure meets a group of Christians who fled the violence in Mosul, Iraq.  She visits the north Jordan city of Zarqa and the Catholic Church where the Iraqi Christians have taken refuge.

Just before the Feast of the Immaculate Conception (8th December), Pope Francis sent a video message  to Iraqi Christians in Erbil, in Iraqi Kurdistan, to tell them of his prayers and closeness in these times of great trial for Iraq’s small Christian community.

An armed extremist group, he recalled, was responsible for  “inhuman violence” directed at  “entire communities, especially, but not only Christians and Yazidis”, because of their religious and ethnic identity. “Christians and Yazidis,” he said, “have been forced out of their homes; they have had to abandon everything to save their lives, but they have not denied their faith. Even holy buildings, monuments, religious symbols and cultural heritage have been affected by the violence, almost as if to cancel every trace, every memory of the other.”

Hearing the Pope’s words brought me back abruptly to Jordan.  I had experience of them there first hand from Christians who had escaped the death threats of Islamic State, had fled to Erbil with what little they could carry.  They sold their cars, their jewellery – anything they could – to buy a $500 plane ticket out of hell.  They chose Jordan, a haven of safety – for now – in a burning Middle East. 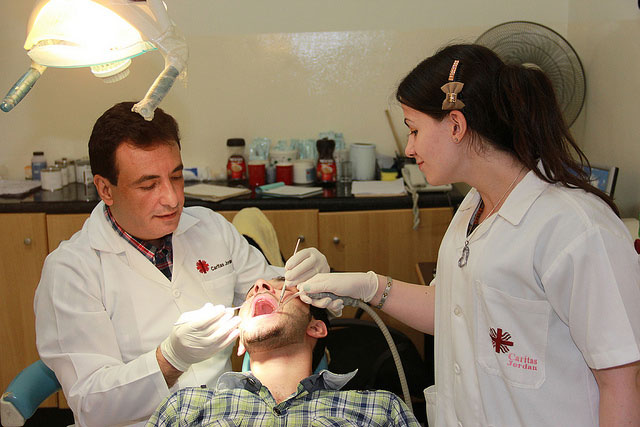 Jordan was accepting thousands of Iraqi refugees, expediting their arrival with special visas.  But the country is struggling under the enormous burden of more than a million and a half Syrian refugees and has little to no resources for newcomers.  Christian churches across Jordan have opened their doors to welcome them; Caritas Jordan is perhaps the only aid agency officially offering help.

I am back there now – in Zarqa.  The director of the Caritas centre, Fares, is taking me to what he calls the “Catholic church” – a beautiful, warm yellow stoned building in the heart of a run-down neighborhood.  It’s really the Greek Melkite church, an eastern rite Catholic church. Inside what was once the parish hall, we find some forty Iraqi Orthodox Christians from the area of Mosul – twelve entire families. Some 300-400 more Christian families are spread out in other parishes.

Fares introduces me to Fady, the Caritas staff member who has been permanently assigned to the Iraqi Christians living in this church.  He helped the parish acquire a kitchen and everything you need to feed forty people three times a day.  They share their meals at a mammoth, long table.  It even has a nice white table cloth.

Families of four, three, five and more are divided up into cubicles. Sheets are drawn across each “home” for a bit of privacy. Mattresses on the floor are beds neatly made.  There’s a Spiderman towel draped across one sheet, a Hello Kitty towel on another: donated treasures from some happy child’s life in Europe or the States. All forty people have to share three modest bathrooms and one shower.

Basman and Farah, a couple in their twenties, have been married just one month.  They, like most of the others, arrived September 4th. I meet Samer, Ghada, Sarmad – so many I can’t recall their names.  One young man was finishing up his last year of computer science college – he had to flee Iraq without his school papers so he has no way of proving how many years of study he had completed. Another young man worked as a pharmacist; another was an electrical engineer.

Twelve of the smaller children go to the Latin Church school downtown.  Some have made new friends.  But their parents tell me they can’t wait to get out of the Middle East, to go to Australia, to Canada – far from “anything to do with Islam”. Their fear is too raw, too ingrained.

Since 2006, life in Iraq has been increasingly dangerous for Christians, they tell me.  Christians were kidnapped for ransom;  a priest was beheaded; Christian shops looted.  Christian women began wearing headscarves when they went out.

I say, “but you have been courageous to stay in Iraq.  The Church, the Pope, do not want to see Christians leaving the land where they have lived two thousand years”!

They are angry.  Someone snaps: “and do they want us to die”?

As we prepare to leave, a young man named Wissam grabs my arm:  “First, you must see this!” he exclaims, opening up a video on his smart phone.

It is a video called “Save Mosul’s Persecuted Christians”  created by a Canadian Iraqi woman.  Watching it with me, the others crowded around us, Wissam draws my gaze and eyes fixed on mine, he says, “You will tell our story, won’t you?”