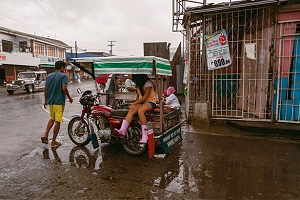 Filipinos are breathing a sigh of relief after Typhoon Hagupit, known locally as Ruby, passed over their islands without causing major damage.

“We thank the Lord, through the intercession of Mother Mary, whose feast of the Immaculate Conception we are celebrating today, for sparing us,” said Jing Henderson, of Caritas Philippines-NASSA.

In the hours before the typhoon, Caritas and the Church helped evacuate some of the one million people who fled the coastal areas to higher ground and sought shelter in churches, schools and designated evacuation centres.

The Catholic Church, which has a vast presence in the Philippines, has been a major source of refuge. In Palo alone—a city hit hard by last year’s Typhoon Haiyan—10,000 people took refuge in churches and parish halls.

The storm was downgraded from a super typhoon to a Category 3 storm on Saturday. It caused some damage, especially through the central part of Samar. “There may be damage brought by Typhoon Hagupit (Ruby), but we were ready when she came,” said Jing Henderson.

Teams from Caritas Philippines and its member organisations have been visiting communities caught in the typhoon’s path. Some have discovered that thousands of shelters built after last year’s deadly Super Typhoon Haiyan had withstood the storm.

“The structures fared well due to the typhoon-resilient building techniques our engineers and construction foremen used when repairing homes and constructing new shelters,” said Josh Kyller of US Caritas member CRS.

Caritas/Church relief teams from Palo went to neighbouring Calbayog to deliver 1,000 packs of relief goods on Saturday. The Calbayog Diocesan Social Action Centre says there is a need for shelter kits, especially for coastal communities. 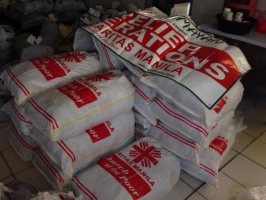 In Dolores in Borongan in Eastern Samar, food packs have been delivered for those affected by the typhoon. CRS intends to ship in 2000 shelter kits within next three days depending on logistics, and Caritas Manila will send prepositioned supplies.

In one of its largest relief operations in years, Caritas Internationalis helped over 800,000 people who lost homes, loved ones and livelihoods during Typhoon Haiyan in 2013.