A blog by Adriana Opromolla 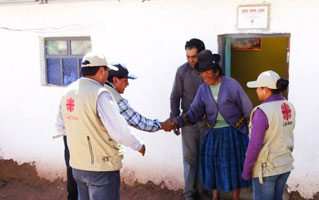 Caritas Peru helps most vulnerable communities in the remote highlands of Peru, most affected by extreme climates. Photo by Caritas Peru

Caritas delegates from four continents participated again this year in the 20th Conference of the Parties to the UN Framework Convention on Climate Change (“COP20”), which took place in Lima, Peru, from 1st to 12th of December.

What made the difference between this COP and the previous ones was the unity shown by the Catholic Church and the high level of its engagement in climate talks.

At the onset of COP20, Pope Francis sent a letter to COP president, Manuel Pulgar Vidal, in which he stressed that climate change was an ethical and moral responsibility.

Following the momentum gained at the September climate summit, hosted in New York by the UN Secretary General, Catholic organisations united their voices to ask Governments for a firm commitment to reduce climate-warming emissions, facilitate adaptation programmes to the benefit of the poorest and comply with their promises for adequate public climate finance. They also stressed the need for coherence and synergy between climate, development and disaster risk reduction policies. They identified the conventional growth model – based on fossil energy consumption, on the depletion of natural resources, on increasing production in market-oriented societies – as the cause of climate change and called for a courageous shift in production, consumption and lifestyles.

Upon invitation of the Peruvian Bishops’ Conference, Catholic Bishops from Asia, Africa, Europe and Latin America came to Lima to convey their concerns, views and proposals to decision-makers in a dialogue event on December 5th. This event was marked by the open recognition that climate change is no longer to be seen as an environmental problem, but as a moral and ethical one: “St. Francis of Assisi taught us to respect the entire creation,” said Mr. Daniele Violetti, Deputy-Executive Secretary of the UNFCCC, “one thousand years later, together with Pope Francis, we are calling again for everyone to care for Creation”. The role of Churches was recognised as crucial in raising awareness, helping decision-makers to make the right choices: “Sometimes we lose the focus of the negotiations and we have to remind ourselves every day” said the French Ambassador to Peru. Prof. Dr. Otmar Ebenhofer, an expert who contributed in the latest scientific findings on climate change, said that “the Catholic Church, as a global community, has a unique potential to help policy-makers and scientists to move forward by recalling the principles of the Catholic Social Teaching. The atmosphere is our global common good and we have to share fairly our rights to make use of it”.

The messages presented to COP20 were warmly received, opening up for further collaboration with decision makers on the road to Paris in 2015, when a new legal agreement on climate change will have to be adopted.

The calls of the Catholic community, however, are not reflected in the final decisions taken within COP20 on the future climate change agreement. On the assumption that the latter will only be negotiated in Paris next year, Governments in Lima have stood by a more technical document guiding the process for adopting their “intended nationally determined contributions” towards the objective of keeping global warming below 2°C and, on the other hand, an annex setting elements for a draft negotiating text that leaves many options open, indicating the lack of clear consensus. Some gains have been made, such as the reference to the urgency of climate action and the principle whereby the “intended nationally determined contributions” have to represent a progression compared to the current undertaking of the country in question. But there is no firm call on developed countries to provide climate finance to developing countries, the respect of national sovereignty is made explicit and there is no clarity on whether adaptation or finance efforts shall feature beside reducing GHG emissions.

Many variables still remain on the way to Paris. Catholic organisations call on decision-makers to explicitly link the future new climate agreement with the sustainable development goals, and to tackle the impact of climate change on food security by explicitly mentioning the human right to adequate food among the objectives of climate action.