Dispatch from the Ebola frontline in Liberia

Liberia seems to be getting Ebola under control. Large numbers of new cases are only found in Grand Cape Mount County, bordering Sierra Leone. In the capital city of Monrovia, with its 1.2 million inhabitants, there are a few suspected new cases every day.

Schools are expected to reopen on 2 February. Even football may resume in a few weeks.

The danger is that people relax their guard or revert to more risky behaviour.

It’s true that in every shop, hotel or office building you enter, you have to wash your hands with chlorine and your temperature is taken with a thermo-gun.

In a culture where handshaking was frequent and elaborate, it doesn’t happen anymore. But slowly things are going back to normal.

2014 was a terrible year for Liberia. Everyone has a horror story. Whole families were eradicated. The Catholic hospital here in Monrovia lost most of its health staff and management. They didn’t run away; they are dead. 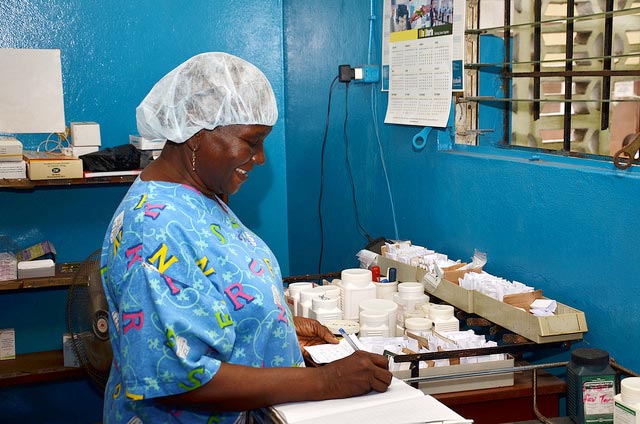 Staff at Star of the Sea, a Catholic clinic in Monrovia, Liberia. Photo by Michael Stulman/CRS

The Catholic hospital was closed, but with the help of the American Caritas organisation CRS, they are trying to restart–training the remaining and newly recruited staff, then reopening the maternity ward.

On 2 January the Dutch Naval vessel Karel Doorman arrived in the port of Monrovia. On board among other things were 15 metric tonnes of aid items from Cordaid (Caritas Netherlands) and a pickup truck destined for Caritas Liberia.

Caritas Liberia, with support of Cordaid and other European Caritas members, is going to bring its Ebola prevention efforts to the most remote rural areas in Liberia. Quarantined families will receive food support and trauma support.

Stigma is a problem: people treated in an Ebola Treatment Unit and certified to be fully recovered have been rejected by family and community. One man survived Ebola yet still decided to take his own life. In places where fear and ignorance have the upper hand, the Church is in a good position to offer support and guidance.

The next challenge will be the reopening of the schools. The president ordered the schools closed in June. Children and teachers have been sitting home for more than half a year now.

Public schools have been paying their teachers, but private schools, including Catholic schools, are dependent on school fees which have not been forthcoming. They have not been able to pay teachers’ salaries. Like half of the salaried labour force, they have been sitting home without any income for over half a year. The question remains: when the schools reopen, who will still money to pay the school fees?

Ebola struck during the planting season, hitting the bread basket of Liberia. Much of the land remained uncultivated. People were too scared to come together to work the land, while the crucial time before the coming of the rains passed by.

Now is the harvest season, but there is nothing to harvest. Food prices in the markets are increasing almost every day. There have been no major riots lately, but when hunger hits, the peace may melt away.