Refugees left out in cold in Middle East 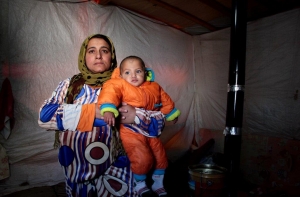 Bouchra and her one year old Bayan are Syrians living in Bekaa Valley. The mother says that their shelter is not good enough to keep out the cold. Photo by Jean Khoury for Caritas/CLMC

Syrians and Iraqis struggling to cope with war in their own countries or as refugees far from home are now facing freezing weather conditions.

“For four years, we have been living in the depths of the cold in a bloody war, but these days we experience the cold in another way after a snowstorm struck the Middle East,” said a staff member from Caritas Syria in Damascus.

“War has left us without any way to defend ourselves against the cold. We have no electricity most of the time, no fuel and no gas.

“We have no way to stay warm apart from putting on many layers of clothes, which don’t help so much in -8 degrees,” she said.

Several people have been killed as a result of the cold in both Syria and as refugees in neighbouring countries. Many of the fatalities are children. 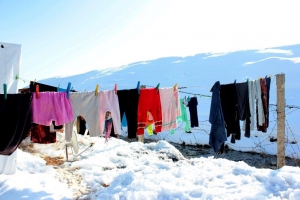 Snow covered mountains as seen from a Syrian refugee camp in Lebanon’s Bekaa Valley. Photo by Jean Khoury for Caritas/CLMC

“We need to put an end to this war, to stop the economic sanctions which made us poor and to tell the world that we are human beings who need help,” she said.

It’s been the biggest storm to hit Lebanon since 1992. Despite the perilous, icy roads, a Caritas Lebanon Migrant Centre team has visited Syrian refugees living in makeshift camps in the Bekaa valley.

They found that heavy accumulated snow has damaged many of the shelters where the refugees live and people are struggling to cope with the sub-zero weather.