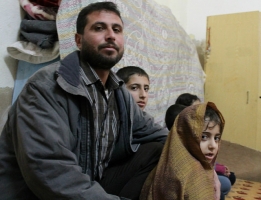 In Jordan, one in six Syrians live in extreme poverty. Dana Shahin/Caritas Jordan

A Syrian family of six live in one room on the top floor of an old building in Damascus. When a winter storm came in early January, the roof leaked, leaving all their clothes and blankets wet.

The mother cut the branches off trees to burn for warmth, but her son almost suffocated from the smoke. In desperation, she was forced to cut her daughter’s hair to sell to buy food for her children.

Or a family of seven forced from their homes by the war. The mother works as a cleaner, the father has a disability and is unable to find work. They have four children under 10 years old. When the father saw his children shivering without anyway of heating them, he burned his own clothes to give them some warmth.

These stories are common for staff at the Caritas centre in Damascus. The 4 year war and economic sanctions have pushed over half the population into poverty.

“There are a lot of families in Syria living in poor shelters, parks or unfinished apartments without doors or with windows replaced by pieces of cardboards or plastic sheets,” said a Caritas Syria staff member.

For the 3.8 million Syrians living as refugees outside the country, the situation is not much better. January’s winter storm, the worst in decades, has highlighted the precarious lives of the refugees, where because of the poverty, the cold bites hard.

In Jordan, one in six Syrians live in extreme poverty, with less than $40 for each person per month. It’s estimated that half have no heating, a quarter no reliable electricity and a fifth have no toilet. 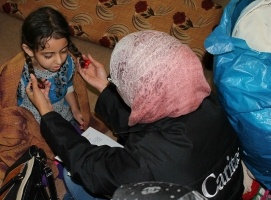 “The situation of the refugees is getting worse. It’s reaching unacceptable levels. They don’t have the basics to be able to survive,” reported Caritas Lebanon Migrant Centre. “The situation all over Lebanon and especially in the freezing regions of the Bekaa Valley is devastating.”

Caritas Turkey has seen an increasing number of Syrians coming to its offices for blankets. In Reyhanli, where Caritas provides help through an e-voucher system, most of the families need mattresses, stoves and fuel to cope with the winter. There is less work in the winter than the summer, and hunger is a problem.

Caritas Syria, Lebanon, Turkey and Jordan have all run winter programmes to help people cope with the recent bad weather.

Caritas Syria has provided the most vulnerable with help for rent, food, health care and education. Caritas Turkey has given 600 blankets to families in Reyhanli. Caritas Lebanon has distributed 6000 pyjamas. Caritas Jordan has provided 2000 stoves, 17,000 blankets and 3000 thermal clothes to Syrians and poor Jordanians.

More help is needed with the winter far from over.