“We are always fasting” in Syria

Last year – 2014 – really was the hardest of all for those of all us who live in Aleppo. The level of destruction in the city reached its peak. Rockets were raining down on us, we often didn’t have electricity or water and the nights chilled us to the bone.

But we must avoid complaining. When I gave my homily at the beginning of Lent, I told people, “I really can’t talk to you about fasting as we’re always fasting. But you have to remember that there’s always someone worse off than you.”

We must focus on visiting the sick, elderly and lonely. As Caritas, we work on projects, but I’ve told the staff that we must personalise as much as possible what we’re doing and visit specific people every single day. It’s just like what Pope Francis says – we need to come out of ourselves and go to the existential peripheries. 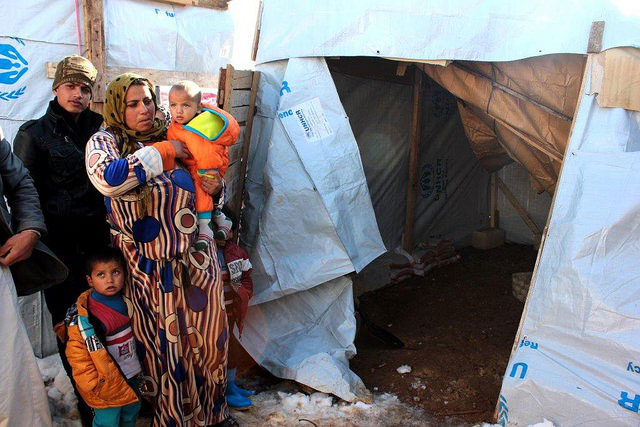 Snow fell in the Middle East in January as a powerful winter storm swept through the region, killing a number of Syrian refugees in Lebanon and forcing thousands of others who have fled their country civil war to huddle for warmth in refugee camps. Caritas has run winterization programmes, providing fuel, warm clothes and bedding and making tents and accommodation more resistant to cold conditions. Photo by Jean Khoury/Caritas Lebanon

Caritas Syria is there to help all Syrians across the country. We work in six regions: Damascus, Aleppo, Homs, Littoral, Horan and Jasiré. We help people through programmes which provide food, medical assistance, educational support, help with paying rent, help of the elderly and counselling.

Not so long ago I came out of my house and there was a Muslim man sitting on the ground outside who had been helped by Caritas. He got to his feet and said, “We know who the Christians are, they are worth their weight in gold.”

People believe because of Daesh and others that this is a Muslim-Christian war, but this isn’t true. Christians are respected by Muslims.

Just this week, dozens of Christians have been kidnapped – they say by Daesh – from a series of villages in Hassakeh. They say they’ve been taken hostage as part of a prisoner swap. It is the most vulnerable who end up being victims of violence.

Everyone keeps saying that the situation in Syria is like the ones in Lebanon and Iraq, that we need to wait a few years before the war stops. They say that there can be no military solution to the conflict and yet they continue to send arms and to train armed groups. There needs to be a political solution.

Young people in Syria need to be educated in peace so that they can build and defend it in an Arab and Muslim context. This means by not provoking or humiliating the Muslims and Arabs and by respecting others.

This war has destroyed whole neighbourhoods, without forgetting the booming industries that were in Syria and the farming. Half of Syria’s inhabitants are either internally displaced or are refugees. Eighty percent of the workforce doesn’t work. The rich have left, the middle class has become poor and the poor have become destitute. Many people have become poor and ill because of the insecurity and the near-destruction of the economy.

We are tired and enough really is enough. There is great sadness in Syria at what has happened. It’s difficult for me to think about the hopes for the future of the next generation of Syrians.

However, we hope to one day build a real sense of citizenship based on the respect of human rights. When this happens, there must be a healthy distinction between politics and religion with religion not being used to the ends of political power.

Syria is a beautiful country with deep roots in history and humanity. It is a place where people of many religions and cultures can live together as a model of human rights and of civilisation. It is a country I love.