My first 10 days in Gaza 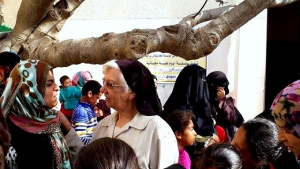 Since I arrived on the 26 January, I’ve observed first-hand the work of Caritas Jerusalem in Gaza in the aftermath of the recent war.

I’ve gone with the medical teams that hold mobile clinics for some of Gaza’s most needy people. As I mingled with the waiting crowds I heard of their need for this kind of service as well as for food and other basic essentials for life.

In Beit Hanoun, I saw the ruins of what had been home to thousands of people some of whom I met in Caritas mobile clinic there. In an area near Khan Younis, I saw the ruined homes of 30 families who now live in tents that are little more than flimsy covering over the sand and soil with no facilities of any kind.

A few people had lit a fire of scraps of wood in a cut off metal container and made tea that they invited us to share with them. One man told us he lost six relatives, including his oldest son, in the recent war.

Another showed me his tent that had a small square of carpet partially covering the sand and a few small cushions and blankets. He and his wife sleep there. Their children sleep with relatives. A young man with a Master’s degree in structural engineering said that he has no work, there are no materials to rebuild the homes, electricity is limited to a few hours at different times each day, often there is no light in the evenings so they sit and play cards.

A 24 year old woman with three others was working as a seamstress when a bomb struck. Her friends died and she lost both legs. She was sitting silently in a very basic wheel chair. The sadness on her face still haunts me.

As I sat there on a low plastic stool drinking tea in front of the mound of rubble that is the remains of these people’s homes, with the flimsy tents behind me and people with despairing blank expressions drinking small glasses of tea made over the burning twigs, I found my mind going blank and numb mirroring the despair on their faces.

I observed Caritas women psychologists help traumatised children express themselves and form relationships through story and play therapy and from Caritas dedicated staff I heard of the other emergency aid offered during and immediately after the war: thousands of hygiene packs and blankets were distributed to the homeless and new school bags to 1,000 children. I have yet to go with Caritas staff to their work in schools where thousands of homeless people still live. 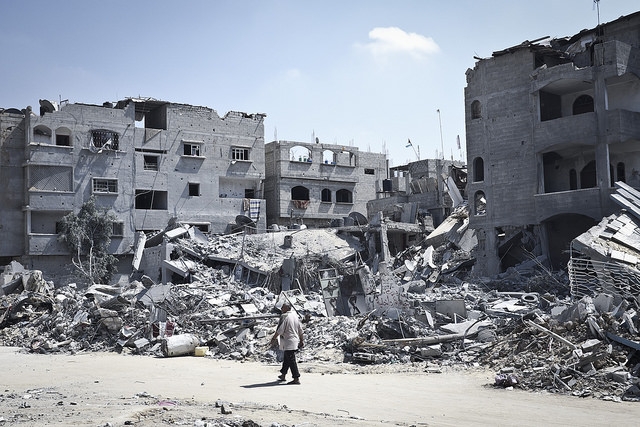 In Gaza, thousands of people have been living in damaged buildings, using plastic sheeting to try to keep out the rain. Around 20,000 displaced are still being housed in UN-run schools. Credit: Virginie Nguyen Hoang/hanslucas.com – Secours Catholique/ Caritas France.

As I reflect on my first days in Gaza I believe that the primary mission of Caritas is expressed in its name: Caritas means ‘love’. The presence of an emergency mobile clinic in an area of extreme need says to the people in a tangible way: we know you exist, we care about you, we are here to offer you medical care with as much normality and dignity as these extreme circumstances permit, and a new schoolbag can help restore self-esteem and confidence to a traumatised and homeless child.

People cannot exist in a constant state of emergency or depend on handouts for long. The people of Gaza are shocked, traumatised and bereaved but they are resilient. They now need encouragement and support to begin to rebuild their lives.

Just as Caritas was there in the time of extreme emergency so now it will take a lead in developing stability and independence within the restraints of economic blockade and restriction of movement. This post-war phase will focus mainly on the physical and psychological health of children and their immediate families.

Some time ago a friend said to me that to live with integrity and inner peace in Israel-Palestine one needs to be a mystic, not in the sense of having exalted experiences in prayer but of seeing God in the suffering of all people in this Holy Land. For me, this holds true in Gaza more than anywhere I’ve lived before.

I find in the Letter of James a way to incorporate into my own prayer the heartache and confusion I experience in seeing so much suffering all around me. James says, “If one of the brothers or one of the sisters is in need of clothes and has not enough food to live on, and one of you says to them ‘I wish you well, keep yourself warm and eat plenty’ without giving them these bare necessities of life, then what good is that?” 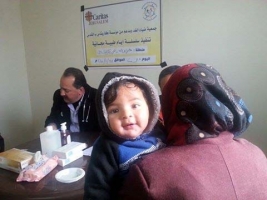 Caritas Jerusalem medical days in Khuzaa in
southern Gaza for families who lost their houses and are living in caravans. Credit: Caritas

As a Franciscan Missionary sister I feel privileged to serve the people of Gaza through hands-on work with Caritas and the words and actions of Pope Francis challenge and encourage me to follow the example of St Francis of Assisi in service to the poor.

We are each called to follow Christ in a personal way according to our vocation. For me it is to live and work in Gaza, for you it could be to give what you can to facilitate the work of Caritas that is ‘love in action’.

Caritas Gaza depends on you; the suffering, dispossessed, mostly innocent victims of others’ actions depend on you; and Christ himself.

Matthew 25:40 says: “In truth I tell you in so far as you did this to one of the least of these brothers/sisters of mine, you did it to me”. Together, each in our own unique response to Christ, let us do all we can to bring the love and compassion of Christ to the poorest of the poor in Gaza.

Caritas is appealing for support to help some of the poorest children in Gaza who have been affected by the conflict with therapy, food, the creation of child friendly spaces, fun days and excursions.  You can donate online here.