Reflecting on the Lenten message of Pope Francis

Pope Francis reminds us that Lent is an invitation to renewal for the Church and among the faithful. To be able to respond to this invitation, Pope Francis warns us against the ‘globalisation of indifference’. He asks the Church and its hierarchy, Christian communities and each of us to hear the cries of those who live in poverty, exclusion and oppression and to use the strength of our faith, our prayers and acts of charity to go beyond his indifference.

We are called to be like God and uphold ‘the cause of the oppressed’, watch over the stranger and sustain ‘the fatherless and the widow’ (Psalm 146). It’s a case of acting in His name, He who made himself known to us as Jesus Christ and who identified with the poor and oppressed (Mt 25) and who came so that we ‘may have life, and have it to the full’ (Jn 10:10). It is a question of countering the globalisation of indifference with the globalisation of solidarity!

To this end we must listen to the prophets of our time within the Church and in society. We must listen to the poor and those who work with them to battle against the dominance of money, the destruction of the environment, the exploitation of natural resources in poor countries, people trafficking and the arms trade. Some of these prophets risk their lives on a daily basis or are quite simply accused of ignorance.

Pope Francis has invited us to be a Church that goes ‘forth to the existential peripheries’ so it can immerse itself in the realities of this world and evangelise with joy.

The pope shows us through his own words and actions his desire for a Church for the poor. He is teaching us to live as a Church which is a family bound by solidarity and a community of love, rather than a just acting like a non-profit organisation. 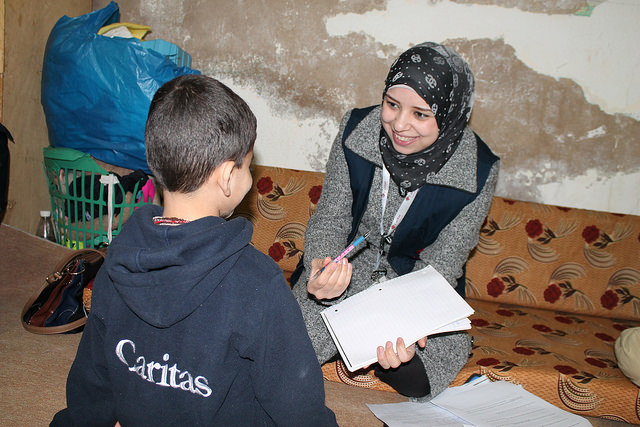 On his recent apostolic trips to Sri Lanka and the Philippines, the Holy Father followed in the path of Jesus and was never indifferent to suffering, misery and oppression. He showed us how to concretely overcome the ‘globalisation of indifference’. He made appeals for peace and reconciliation in Sri Lanka, which not only suffered the tragedy of the tsunami 10 years ago, but which also endured many decades of a murderous war.

In the Philippines, Pope Francis was received by millions of people who were clearly not indifferent to his words and gestures. In Manila, he met street children and we saw him deeply touched when a little girl said she could not understand how God allowed innocents to suffer. He went to Tacloban, which had been battered by a typhoon. He spoke to politicians and business leaders of a world which continues to make decisions which increase inequality and suffering among the poor. He warned against ‘ideological colonisation’ where basic values such as the family, the care of creation, solidarity and human dignity are attacked.

The pope continuously brings our attention to those who are in distress. He encourages us to work to promote the dignity of migrants and  to promote peace in the Middle East, Ukraine, Nigeria and the Central African Republic, where he is planning to visit this year.

We are called to support peace in Sudan and South Sudan, to bring aid to refugees, to not forget people afflicted by Ebola and to promote the right to enough good food for everyone. The pope continues to support the Caritas campaign ‘One Human Family, Food for All’ which many Caritas organisations around the world are promoting.

In May this year, Caritas Internationalis will hold its General Assembly in Rome. The central theme for us will be the call of Pope Francis to create a Church for the poor. The pope’s words and deeds as well as his Apostolic Exhortation, Evangelii Gaudium, with his homilies and speeches and his papal trips will provide us with a strong basis for our meeting. He has laid down a challenge to Caritas to be a sign of God’s love for humanity and to be ‘the caress of the Mother Church to her children’.

It is a privilege and responsibility for us as Caritas to answer this call and to become an expression of a Church for the poor. It’s a Church which offers us the path to conversion, a return to what is essential in life, an opportunity for sharing and making our lives more simple, following the example of the saints.