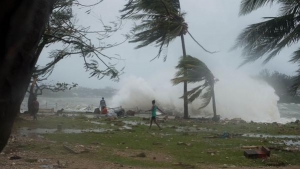 People on the South Pacific island of Vanuatu sheltered in churches and schools as a powerful tropical cyclone hit overnight. Scores are feared dead and thousands affected in one of the largest cyclones to hit the country.

Cyclone Pam, a category 5 storm, made landfall on the most populated island of Efate, where more than 65,000 people live, including the capital Port Vila.

“We are concerned at the intensity of Cyclone Pam and are awaiting assessments of the damage and impact,” Ms Lalor said. “We are liaising with our Pacific partners, staff and Church networks to monitor the aftermath of the Super Cyclone, assess damage and respond to requests for support should it be needed”.

“The church has a valuable role to play in responding to disasters like this one which often impact vulnerable communities the most. That’s why the ongoing work in the region to support communities to reduce the risk to natural disasters such as Cyclone Pam is so important.”

In Vanuatu, the UN said the tropical cyclone had moved west of its predicted route, and as a result putting several islands of the Vanuatu archipelago “directly in the path of the very destructive eye region of this cyclone”.

According to the UN, the regions of Maewo, Ambae and Pentecost were most likely the hardest hit, with more than 30,000 people living there.

Ms Lalor said Caritas Australia partners in the region had reported evacuation and safety preparations have been underway for a few days as the Cyclone has been moving through the Pacific.

Tropical Cyclone Nathan, now located in the Coral Sea as a Category 2 cyclone, is expected to intensify and turn towards Papua New Guinea, the Solomon Islands and possibly Vanuatu next week. This could have devastating effects for communities living in areas that have already experienced prolonged and heavy rains and other impacts from Tropical Cyclone Pam.

Donate to Caritas Internationalis Emergency Response Fund to support the Church’s humanitarian action on this disaster.