Alexandre Veliky is turning 60 today. His wife Galina has invited their dearest friends, Anatoly and Lyubav, whom they’ve known since college, to come for a modest lunch in their new surroundings — a run-down, drafty cottage in rural Izyum, eastern Ukraine

Both couple had good jobs and houses this time last year. They are now homeless, having been forced to flee their hometown of Lugansk when conflict erupted in heavy shelling and fighting.

They are among the 1.5 million people across eastern Ukraine who have fled their homes as a result of the armed conflict between Ukrainian government forces and separatist groups in the eastern Donbas regions. 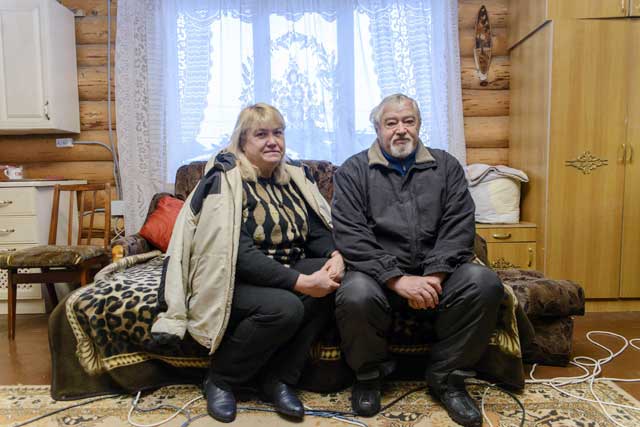 In rural Izyum in eastern Ukraine, being displaced has separated families and the loneliness weighs heavily. “Our lives are radically different now. We used to have jobs, we were occupied. Now we have nothing. We are sitting here waiting for the end of life.” said Lariss (L) and Yuriy Chernov (R). Ukraine conflict 2015

Hostilities have been escalating over the past several months by pro-separatist rebels — who identify with their Russian roots and seek independence from the Ukraine — and Ukrainian forces fighting to keep the regions under government control.

“During Soviet times a lot of people from Russia moved to this part of Ukraine and we got settled, and it became our home,” says Anatoly, who is half-Ukrainian, half-Russian. “And now all of a sudden people want to be back in Russia. These people are not local in origin. They didn’t ask the local people what we want. We never wanted anything like this to happen.”

Added Galina, “I am Russian but in my heart I am Ukrainian. I would die for Ukraine. I don’t want to live in this terror.”

For those who flee the violence in their towns, needs are high for medicine, clothing, rent, firewood and food. Galina and Alexandre are receiving CRS/Caritas support of a cash grant, in the amount of €265 (US$300), that will allow them to purchase the most critical living items.

“We knew it was time to leave when one of the shells came into our garden. The blast threw my grandchildren across the room,” says Galina.

The couples fled in July 2014 taking very little with them. Both couples found refuge in different towns — Alexandre and Galina in rural Izyum, and Anatoly and Lyuvab in Kramtorsky, 80km away. Like many people, they found shelter through their network of friends. They have Alexandre’s mother with them, who is in her late 70s. Conditions are very basic.

But even these modest conditions aren’t guaranteed for long. Without income to cover the rent, they worry about how long they can stay and what the future looks like. 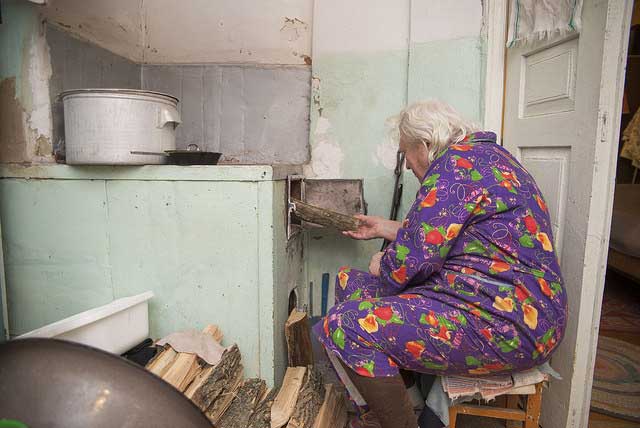 In the blistering winter in eastern Urkaine, displaced families struggle to keep warm in their temporary conditions. Photo by Volodymyr Nechaiev for Catholic Relief Services

“We are pensioners and it is impossible to survive on our pensions somewhere else. Because of our age, we’re not able to get employed. I had a business at home. My husband worked for the Government as the head of construction. But, even our children who are younger cannot find a job here,” says Galina.

Trauma is high among children and especially adults. People say the echo of shelling will never leave them. Adults ask for counseling for themselves and their children. Anatoly was in tears as he described the sheer loss of all that they had built. And, the pressure of the unending decisions weighs heavily: Where can I safely take my family? How long will our funds last? Will we ever be able to go home? If not, what does our future look like?

As far as what’s to come, the group of friends has no answers. They describe just wanting to have their lives back, or at least to have a means to be self-sufficient once again.

“My birthday wish? Most of all I would like the war to be over,” says Alexandre. “It is peaceful here [in Izyum]. People are kind and responsible. Maybe in spring we will get some chickens or plant some gardens or do some things. The main thing is we want the war to be over. As long as there is no more fighting.”

For now, they have the comfort of their friendship and being by each other’s sides as they have been since their youth.

Catholic Relief Services is working alongside its local partner Caritas Ukraine to provide emergency relief to thousands of vulnerable people. Emergency efforts prioritised distributions of food, water and living supplies at the outset of the crisis and, for the current winter, shelter support and winter materials to 4,100 families. We are currently providing cash grants to nearly 2,000 families to help them pay for critical needs, including fuel, food, children’s clothing, and rent. We carry out these efforts in the provinces of Kharkiv, Dnetropetrovsk, Donetsk and Zaporizhia. We continue to ramp up efforts as resources allow, and to meet the rapidly moving nature of the conflict.

*Catholic Relief Services is a US member of Caritas