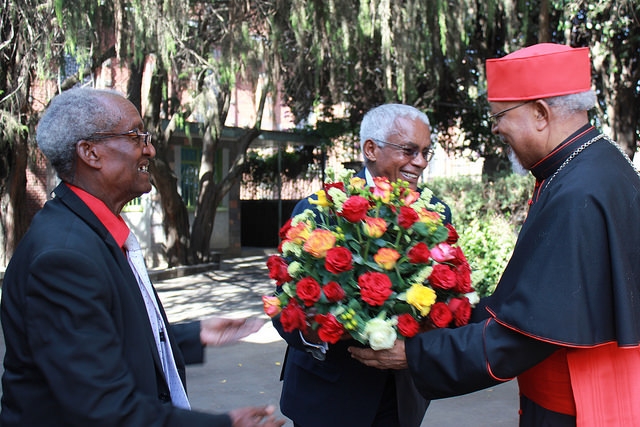 The Catholic Church in Ethiopia has been working for national reconciliation between ‘Derg’ officials and the people of Ethiopia for a long time. The Derg military council ruled Ethiopia from 1974 until 1987 as a communist dictatorship. During their reign, tens of thousands of people were imprisoned without trial and countless were executed.

Many of Today’s religious leaders in Ethiopia were among those jailed by the Derg. Berhaneyesus Demerew Souraphiel, recently elevated to be a cardinal in February, was one of those arrested when he was a young priest in Keffa and Jimma.

After power changed hands following a civil war, many of the Derg officials were imprisoned and sentenced to death for the crimes they committed while in office. In prison, they apologised for their crimes. The Church and other religious institutions then worked with the government to pardon them of the death penalty.

“Blesses are the peacemakers, for they will be called children of God” (mt. 5:9)

As part of the peace process, religious institutions supported a National Committee on reconciliation. Finally, the Derg officals had their death sentence commuted to a life time in prison, which is 25 years in Ethiopia. Having already served 20 years in prison, they were released on parole 3 years ago.

One of the first things the Derg officials did was visit Berhaneyesus, now archbishop of Addis Ababa, to thank him personally for all his kind efforts and mercy. Among the released prisoners was Captain Tessema Belay, the official who had imprisoned him. Berhaneyesus had visited Captain Tessema while he was in prison and he had even comforted his family.

The former officials, including Captain Tessema, then paid a visit in February to congratulate him on his elevation to a cardinal. During the event, the group leader Captain Fikresilassie Wegderes said that it is a great pleasure for them to be at the Cardinal’s office and congratulate him for this honor.

“You mean a lot to us as you were by our side at the most difficult time of our lives, you have thought us to pray, to forgive and to love; and most of all, you were our voice,” he said. He thanked the Catholic Church for its role in their release. “Thanks to you and other religious leaders we are living a free and peaceful life with our families, you went through many complicated processes for our release and it will remain in our heart forever,” he said.

Cardinal Berhaneyesus stressed on the importance of forgiving one another. He said the National Committee is still active and efforts of achieving national reconciliation are ongoing. He said the Catholic Church will continue to do her part as member of the committee and on the other side the Church will also work to contribute to the rehabilitation process of both the victims of the Derg and some of the released former officials.

His former captor, Captain Tessama, said, “When I asked you for forgiveness, I did not have to repeat it again, you told me right away that you had forgiven me a long time ago. We all have a unique feeling for you and the Catholic Church as you were there for us in our time of need, you have taught us a lot.”