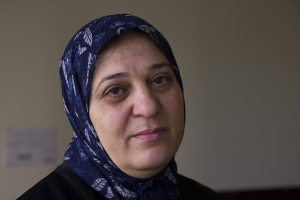 “I had no money and no means to get any, and Caritas really helped me a lot,” said Ghossoun. Credit: Tabitha Ross/Caritas

In Syria, its traditionally a great pride to be the mother of sons and Ghossoun was rightly proud of her five boys. Brought up on a farm in the Homs region of Syria, each one grew up and went into the army when he left home – a stable and respectable career. Ghossoun and her husband were left at home with their youngest, their only girl.

Then Syria descended into war.

“We didn’t want to participate in the war. We were neither with the regime nor against it. But unfortunately we were not allowed that option,” said Ghossoun.

Because they were in the army, her sons were targeted as regime supporters, though Ghossoun says their choice of career was not a political statement. The threats got worse, and one terrible day, Ghossoun’s husband was murdered as he worked on the farm.

Fearing for her children’s lives, Ghossoun fled to Lebanon with her family.

This made her sons military deserters, and now they are in trouble with both the regime and its opponents. “We told the authorities that their father was killed and their lives were threatened, but of course they didn’t believe us,” she said.

They have also been pursued to Lebanon by the group that killed her husband, and have had to move around several times. Now they live in hiding, only leaving the house when absolutely necessary.

It became absolutely necessary one day in 2013 when Ghossoun started bleeding and came to a Caritas Lebanon clinic for help. To her shock, she was diagnosed with intestinal cancer.

The Lebanese health system is largely private. It’s rare to get free treatment even at one of the few public hospitals (where indeed care is less good), and even if you’re Lebanese.

For poor Syrian refugees in need of medical care, this is an enormous issue, and many struggle desperately to access care. While the UN will pay up to 75 percent of medical costs, this is subject to the case meeting various selection criteria, and the family or individual involved being able to find or raise the other 25 percent.

Caritas were able to provide additional funding for Ghossoun to get the operation she needed. Caritas is one of the only organisations in Lebanon supporting medical fees.

“As soon as they diagnosed my case – and I’d like to thank everyone at Caritas who was involved – they directed me to the UN for funding and to hospitals where I could be treated,” she said.

One year on since the operation, Ghossoun is cancer free, and has been seen regularly for follow up at a clinic which offers care to Lebanese, Syrian and Iraqi patients.

Many of the services offered at the clinic have been free for the last two years – such as blood tests, x-rays and medication. It was also free to see a general practitioner, a paediatrician or a gynaecologist. The clinic is now seeing 30 families a day, though at the busiest times last year it was seeing 50. 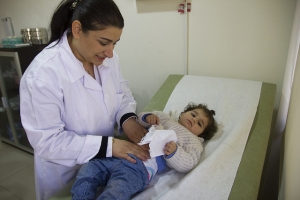 Caritas is one of the only organisations in Lebanon supporting medical fees. Credit: Tabitha Ross/Caritas

Currently the clinic is unable to offer these services for free as the funding for that project has run out. But clinic director Zelfa Antoun is hoping that more funding will come through soon, enabling them to offer these vital services without charge to those who desperately need them once again.

“Social problems and poor living conditions can cause or exacerbate serious medical problems,” said Ms. Antoun, who is a registered nurse.

“We see many problems due to bad living conditions, damp, poor sanitation. We see scabies and other dermatology issues. Diabetes. Hypertension. Diarrhoea. Even TB.”

The clinic’s paediatrician, Dr. Rouchdy El Haj, said, “I work here because I want to help people. Sometimes it is frustrating because we don’t have the power or resources to do what we need to do. We are doing what we can but it is not enough”.

With nearly 1.2 million Syrian refugees in Lebanon, the need is great. For Ghossoun however, the Caritas team were quite literally life-savers: “I had no money and no means to get any, and Caritas really helped me a lot”.