Sitting on a blanket on the grass in the first warmth of the March sun, Eman looks shell-shocked to find herself in Lebanon, safe from the fear of violence for the first time in nearly four years. When I meet her, she has been here just over two weeks.

Despite coming from Daraa, the region of Syria where the uprising first began on 15 March 2011, and which has seen bitter fighting and bombing, Eman has only just decided to flee the country.

I ask what was the final straw, after so much suffering, that pushed her to leave. With tears in her eyes she said, “At the start of the war my husband disappeared, so I didn’t want to leave because I had the idea that he would come back. But in February my house was bombed and destroyed so I decided to come here.” 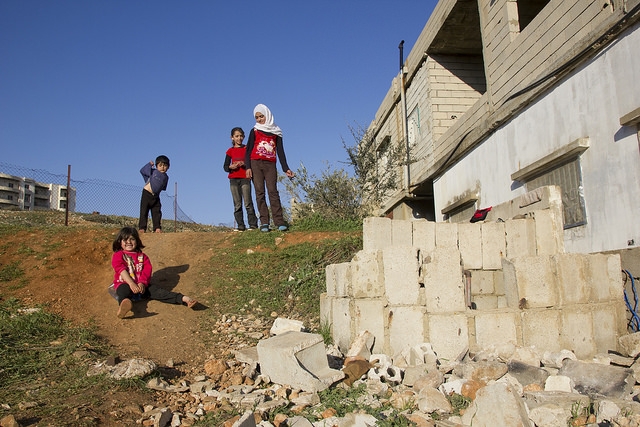 Eman tells me how she and her four children spent three days on the road from Daraa to Damascus. Reaching the capital, they spent two nights sleeping in the freezing street. Finally a taxi driver took pity on them and brought them here to Lebanon, where she is staying with a cousin in an unfinished breeze block construction in the Bekaa Valley.

“I feel ashamed because I have no money and the family that I am staying with have barely any money either. Maybe we eat one day and then for three days we do not, because we don’t have the money to buy food,” she said.

The kids are messing around, sliding down a dusty slope on an improvised sledge made of a flattened plastic water bottle. One of the littlest boys has come off and banged himself on some rubble. Eman jumps up and runs to him, bringing him back to the blanket and comforting him. She explains that he sometimes has epileptic fits, so she tries never to let him cry. She would like him to see a doctor, but with no money for food or the rent which is due tomorrow, she seems at a loss as to how to do this.

Before we leave, Caritas field staff promise to return the next day with $200 each for Eman and her cousin, which will enable them to pay for food and the rent. Caritas will also be able to advise Eman on how to get medical support for her son, and help her with the bureaucracy ahead of her as she goes through the process of registering with the UN, and gradually getting settled in her country of asylum.

We leave to go on to meet another family, the image of Eman and her children standing silhouetted against the descending sun burnt in my mind.

We drive into the town of Zahle, and into an industrial zone. It seems an unlikely place to visit a refugee family, but sure enough, a door in one of the buildings opens and we are welcomed into what must be a former storeroom, windowless and dim, in which live Tony and Abir Atiey and their 13-month-old triplets.

The family became known to Caritas Lebanon because the triplets were born 10 weeks premature; Caritas helped pay the cost of keeping them in hospital for two months.

If Eman is one of Lebanon’s most recent Syrian refugees, Abir and Tony must be two of the earliest, having been here since September 2011. They left Syria with nothing but the clothes they were standing up in when their home town of Qusair came under heavy bombardment. 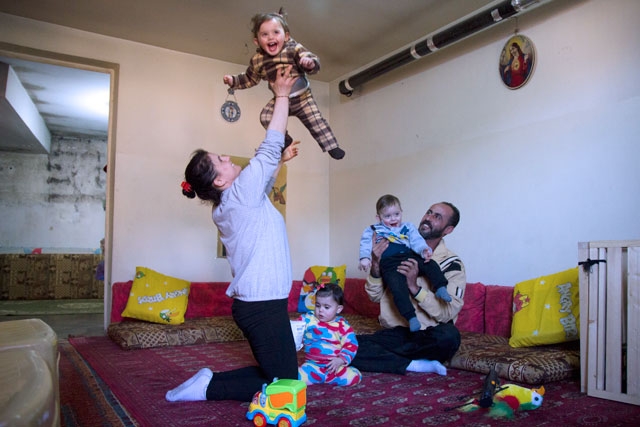 Triplets Rita, Therese and Elie and their parents Abir and Tony arrived in Lebanon in 2011. Credit: Tabith Ross/Caritas

Abir and Tony’s home is dark and has scanty furniture, but for all its evident poverty it is cosy, with a large rug, mattresses on the floor, and icons everywhere. The couple have done their best to build a life for themselves here in Lebanon.

But even after three and a half years of exile, Tony does not have regular work, and he worries about their future. “Here in Lebanon we are just surviving, not living,” he said.

Reflecting on Eman and Tony and Abir, I’m struck not so much by their differences as by their similarity. Yes, one family has been here less than three weeks and the other more than three years; yes, Eman’s situation is more immediately dire; but both families have lost their homes in Syria due to bombing and are facing frightening poverty here in Lebanon. And both have received support in an hour of desperate need from Caritas.

The situation for Syrian refugees in Lebanon is tough, and the needs are enormous, but as the humanitarian crisis enters its fifth year Caritas staff are meeting this overwhelming situation with dedication and perseverance, and in many cases being the crucial difference between survival and destitution.