Three courageous women received the “Women, Sowers of Development” prize on International Women’s Day (March 8th). The prize, given by Caritas Internationalis and Voices of Faith, honors women whose hard work has transformed their communities, lifting them out of severe poverty.

One of two 10 000 euro prizes went to a Caritas Nicaragua programme that brings seeds, irrigation supplies and more to farmers. Accepting the award at the event, Alba Marina Rosales Ruiz–Caritas winner and Nicaraguan farmer—said, “the programme helped me move forward and send my children to school.”

The other prize, for a non-Caritas project, was accepted by Reem Alhaswani on behalf of the Syrian and Palestinian refugee women who won the award. Reem co-founded Basmeh and Zeitooneh, an organisation that teaches women embroidery, computers, English and more. With the profits from their handicrafts, the refugee women can support their families. “These women are brave,” said Reem. 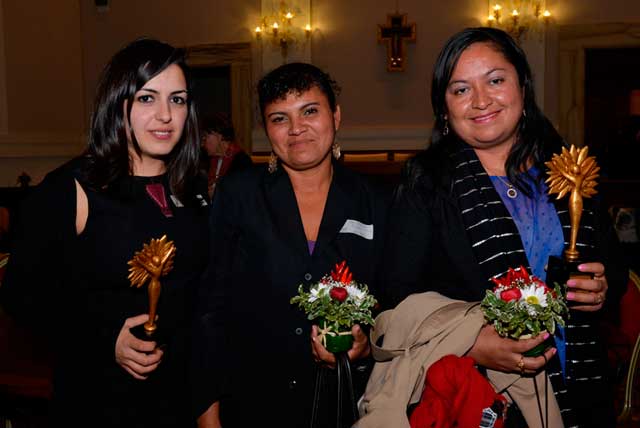 In days preceding the award ceremony, Juana Bertha Duarte Somoza—a Caritas Nicaragua field staffer who accompanied Alba Marina–talked about the strength of the women farmers she serves. Faced with poverty and machismo, the women have managed to make a success of their farms. “The women have a lot of problems, but they don’t say “Why me?” We learn from them,” said Juana Bertha.

“One woman, she’s doing the work alone. She has three children,” continued Juana Bertha. “Caritas gave her construction materials for water catchment. She had to walk three hours to get it. She carried it back. I can see that she lives better now.”

The prizewinners spoke during a larger “Voices of Faith” event sponsored by the Fidel Goetz Foundation. The afternoon featured women from several continents involved in aid work and women’s issues. Via Skype, the audience heard the story of Suad Mohamed, a Somali refugee who thought a generous man was paying for her schooling—until he came to claim Suad as a repayment for his “loan.” With help from Jesuit Refugee Services and others, Suad avoided the forced liaison and got an education.

“Suad’s story is one of a happy ending. Other girls are not so lucky,” said Dr. Mary McFarland, International Director for Jesuit Commons: Higher Education at the Margins. Her group provides Suad and others with distance learning opportunities in refugee camps, fighting against entrenched notions of who should go to school. “Suad and her family were ostracised because her father insisted that both his sons and his daughters would be educated,” said Mary. At one camp, Mary’s group set up a classroom, but only young men came. “We said, ‘Gentlemen, where are your sisters? They must be here.’”

McFarland spoke about other issues facing women caught up in war. “Rape is a strategic weapon of war now,” she said. “The churches of the world must start to speak out on these issues. We are in dire need.”

Father Agbonkhianmeghe Orobator, a Jesuit priest from Nigeria, gave an impassioned plea to help not just the girls abducted by Boko Haram in his country, but all girls suffering violence and discrimination. He said girls are treated as “useful currencies” whose “market value is calculated” based on looks. Kidnapping, rape, beatings, overwork, and lack of access to resources—money, food or school—rob the world of half its potential. But the “nonchalance and indifference” of people in power means that girls often have little chance to escape a cycle of misery. Father Orobator wept for the “millions of of girls whose gifts will be forever lost to humanity.”

“We must not be resigned. We must not lose hope,” said Sister Marta Pelloni, a nun from Argentina who fights human trafficking and helps victims of sexual violence. She told the story of a 17-year-old girl raped by the sons of a powerful man and later killed. Years later, under pressure from her and other groups, “we got justice,” she said.

Martina Liebsch, head of advocacy for Caritas Internationalis, touched on how food scarcity affects women and girls. “If our relationship with food were right,” she said, “We would not allow women to go hungry more than men.”

From giving refugees an education, to stopping girls from being sold as sex slaves, to providing health care for the poorest, the Voices of Faith speakers shared what’s been effective in helping women reach their potential. Many women working to raise their communities out of poverty rarely receive awards or recognition. The “Women, Sowers of Development” prize seeks to change that. Says Juana Bertha: “It’s the women who do the work.”