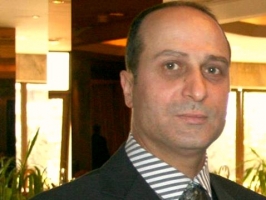 Safouh Al-Mosleh will be badly missed by his colleagues in Aleppo, in Syria and beyond.

The Caritas family joins with our friends in Caritas Syria to mourn the death of our colleague, Safouh Al-Mosleh. He was killed at noon on 7 April when a shell fell on his house in Aleppo.

He will be badly missed by his colleagues in Aleppo, in Syria and beyond.

Caritas Internationalis Secretary General Michel Roy said, “The Caritas confederation sends our deepest sympathy and prayers to Safouh’s parents, brother and sisters, to Caritas Syria and to the team in Aleppo, who achieve so much in such difficult circumstances.

“Sadly, this tragedy will not be the last heartbreak in Syria.”

His neighbourhood had experienced heavy shelling recently. Farhat Square is a symbolic area of Christianity in Aleppo as three cathedrals are located there: Greek Catholic, Armenian and Maronite.

His family had evacuated a few days ago. It seems that Safouh went back to check on the apartment, after spending the morning taking care of his elderly parents. The mortar struck, causing a huge fire in which he was unable to escape from.

In his forties, Safouh was an engaged and active member of Caritas from the Greek Catholic community. He began working for Caritas over a year ago.

Caritas Syria provides food, shelter and other aid to especially poor and vulnerable people. It’s one of only a handful of independent aid agencies left operating in the country. In Aleppo, Caritas Syria helped 1600 elderly people in 2014 in Aleppo.

Caritas Syria says that the situation in the north is getting worse every day, especially after the fall of Idlib to Jabhet Al-Nosra Army.

Idlib is located in the northwest part of Syria, not far from the strategic road between Aleppo and Damascus. Aleppo, the largest city in Syria with a pre-war population of over 2 million, is threatened by radical Islamic fronts (ISIS in Al-Raqqa and Jabhet Al-Nosra in Idlib).

Caritas staff members say, “Aleppo has been cut off for 16 days, with no telecommunications, Internet or electricity. In the last four days, the situation is even worse with the escalation of mortar shells hitting the city every day.”