The devastating 7.9 magnitude earthquake that hit Nepal early on Saturday morning has caused widespread destruction, injuries and loss of life and livelihoods. Caritas Australia staff are currently on the ground working alongside our Caritas Nepal to coordinate the emergency response for thousands of people in the worst affected communities. Lilian Chan, Caritas Australia Online Editor, was working in Kathmandu when the earthquake struck. 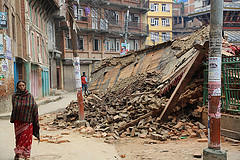 The earthquake struck without any warning. One minute I was filming an interview with a participant in one of Caritas Australia’s programmes in a village outside Kathmandu. The next, we were running to an open field as the ground shook violently and debris from houses went flying overhead.

Fortunately, the village of Pharping was spared much of the devastation we’ve now witnessed in Kathmandu. But as we watched the clouds of dust rising above collapsed houses, I knew that Caritas’ presence in the community would be more important than ever.

After the ground settled, we walked around the village to survey the damage. Having lived through earthquakes before, most people knew to take refuge in the open fields. I saw one young girl, probably no older than 4, sitting with her family, her eyes wide with fright. People her age have never experienced an earthquake like this.

The drive back to Kathmandu was a sobering one. As we passed yet another community coming to terms with the shock, I noticed a group of people standing on top of a large pile of rubble in the distance. It looked as if their home had completely collapsed and my colleagues said that the crowd were probably trying to rescue people still trapped in inside.

The scene in Kathmandu was heartbreaking. Buildings I had only seen for first time just days earlier were reduced to heaps of debris. People were evacuating their homes, with nowhere to take shelter. And we saw patients evacuated from the hospital, only to be treated on the ground, out in the streets.

Since the initial earthquake, we have continued to experience tremors, including a massive shock of magnitude 6.8 at around midday on Sunday. I have never experienced an earthquake before. The initial tremor is terrifying. But the continued threat of destructive aftershocks leaves people vulnerable long after the first shock.

A few days on from the earthquake, many people in Kathmandu are still sleeping out on the street or in open public spaces. Fearful of the aftershocks, people are still anxious that more homes and buildings will collapse.

Since Saturday, I have had the opportunity to speak to people who have been evacuated or lost their homes completely. Their experience is humbling. They are making do with what they have and courageously doing everything they can to look after themselves and their families. But rain and the cold nights are making the situation even more difficult, and food, water and basic necessities are scarce.

At the moment, our Caritas network are supporting the Caritas Nepal team as they prioritise emergency shelter, trauma counselling, food, clean water and the hygiene materials they desperately need. As the emergency response continues we will be working with communities to rebuild their livelihoods in the long term.

As I work alongside our partners in Nepal, and visit the affected communities, I’m overwhelmed and inspired by people’s generosity, ingenuity and resilience. With prayers and assistance flowing in from the international Caritas network, these communities will be bolstered by these acts of solidarity as they work to build back better.