Caritas is providing aid to survivors sheltering in the Assumption Church in Kathmandu. Credit: Caritas Australia

Vast tent cities have sprung up in Nepal’s capital, Kathmandu, for people displaced by a major earthquake at the weekend as strong aftershocks continue.

“We hope to go back to our house soon, but are hesitating because of the aftershocks,” said Renuka Magdalene Thakuri, 54, who has sought shelter with 200 other people in the Assumption Church.

Caritas Nepal has been providing tarpaulins to offer protection from the rain and cold temperatures. “We are distributing the necessary things – tarpaulin, tents and food. People are in dire need because it is already the third day after the quake,” said Caritas Nepal director Fr. Pius Perumana is in Kathmandu.

Renuka Magdalene Thakuri said, “We feel save in the church premise and thankful to Caritas Nepal for the tent. We have food and water, but shops and markets are closed. We are managing somehow though.”

“What I have seen is a lot of destruction. So many buildings collapsed and cracked. I saw a number of bodies on the street. People are still trapped in buildings and we don’t know whether they are dead or alive,” said Fr. Pius Perumana. 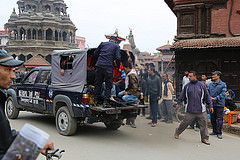 Search and rescue teams are still looking for survivors. “We don’t know the real situation in a lot of areas because big buildings have collapsed,” said Caritas Nepal director Fr. Pius Perumana.

Aside from Kathmandu, the districts of  Bhaktapur, Lalitpur, Raswa, Kavre, Dolakha, Gorkha, Ramechap, Nuwarkot, Sindupalchok, Dhading, Makawanpur and Sindhuli have all been affected. Several thousand households are expected to be in need of immediate temporary shelter. Water, sanitation, and hygiene are the priority needs.

Santosh Kumar Magar, 29 years old, is a teacher and one of the youth of the Assumption Church. When the earthquake hit, he was attending the ordination of one of the new priests in Okhaldhunga, a remote part of Eastern Nepal.

“It was almost 11 o’clock when the earthquake came. I came out of the room, and saw 2-3 houses falling down around me. Some of the animals died around the same time. The people were saved because all the villagers were gathered for the ordination programme.

“It was a terrible experience, I have never had an experience like that in my life. It was the first time. I cannot explain it… it was very terrible, I was upset.” 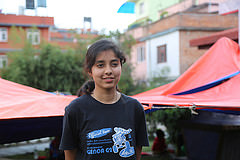 “We came to the church because we know a lot of people here so we can be together and coordinate and help each other out. Now later I feel everything is going to be alright.”
said Qurnain, 15 years old.

“What the people need immediately is shelter. Temperatures are dropping at night and there is also rain. Children are sleeping outside at night. It is really traumatic for them. We’re providing candles and matches so people have light at night as the electricity is out,” said Fr. Pius Perumana.

“I felt scared and about to die [when the earthquake hit],” said Qurnain, 15 years old, who is with her family in the Assumption Church in Kathmandu. Her brother Ahmed said he “felt as if I was flying because my elder brother dragged me from the house to the street.”

“We came to the church because we know a lot of people here so we can be together and coordinate and help each other out. Now later I feel everything is going to be alright.”

Communication officer Lilian Chan is in Nepal and is helping coordinate communications for the Caritas confederation relief efforts. Her contacts are 0061 410 009 200 and email LilianC@caritas.org.au