Worldwide Caritas organisations to meet on Caring for Creation 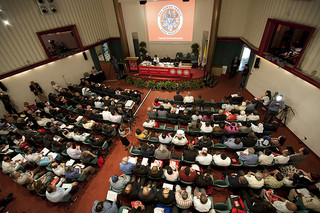 The leaders of Catholic agencies from around the world will be in Rome from 12 – 17 May for the 20th Caritas Internationalis General Assembly, titled “One Human Family, Caring for Creation”. It will start on Tuesday evening 12 May with a Mass with Pope Francis in St. Peter’s Basilica.

Delegates will elect their leadership and approve directions for the confederation of 164 national aid organisations for 2015-2019. The focus will be on growing inequalities as well as the impact of climate change in the run up to a landmark papal encyclical on ecology and a critical UN meeting in Paris.

Cardinal Oscar Rodriguez Maradiaga will preside at the event. He is stepping down as Caritas Internationalis President after 8 years in office.

Cardinal Rodriguez said, “The Caritas Internationalis General Assembly is a unique moment in the life of the confederation and the Catholic Church, bringing together a wealth of different cultures and experiences. We celebrate our faith and our mission but also agree on how we can better alleviate the suffering of the poor.

“Over the last decade, millions of people have been given the tools to improve their lives through access to education, health, food and employment. There is a generation of people, both young and old, who want to work together to build a better world.

“Our Caritas workers are on frontline against poverty. As they meet in Rome they’re faced with new challenges ranging from rising inequality, climate change, food insecurity, water scarcity, urbanisation, conflict for resources and the spread of extremism.

“In 2005, 40 million people in emergencies needed assistance. In 2015, that number had risen to 79 million people. Every 10 seconds, a child dies from hunger-related diseases. By 2025, 2.7 billion people could face severe water shortages. By 2050, global warming could make 200 million homeless.

“The Catholic Church has a vital role to play through organisations such as Caritas in providing humanitarian relief, promoting integral human development and calling for greater social justice. ‘One Human Family, Caring for Creation’ is a message of hope: that by working together we can protect the people and the planet from the poverty of exclusion and the excesses of consumerism.”

Cardinal Rodriguez Maradiaga will officially open the General Assembly on 13 May at Domus Mariae Hotel Palazzo Carpegna. Elections for the leadership will take place on 14 May.

Guest speakers will include theologian Fr Gustavo Gutierrez, economist Professor Jeffrey Sachs and Beverly Haddad from the University of Kwazulu-Natal.

Among the delegates will be 50 extra guests representing young people, volunteers, grassroots communities and campaigners against hunger.

After the General Assembly, Caritas delegates will go to the EXPO 2015 in Milan for an official EXPO Caritas Day on 19 May. The event is part of Caritas’ campaign ‘One Human Family, Food for All’ which aims to end hunger by 2025.