Caritas is helping thousands of refugees who are fleeing clandestine killings and political violence in the small east African nation of Burundi. Sparked by a presidential bid for reelection, the crisis has spread to many areas of the country, with roving military bands threatening families and killing opponents. The United Nations’ refugee department estimates that over 70,000 of Burundi’s people have fled their homes for nearby countries. Many refugees left with nothing.

In Tanzania, Catholic Relief Services (a Caritas member from the USA) is supporting Caritas Kigoma to help thousands of refugees coming in by boat and bus to a stadium that is serving as a transit centre. 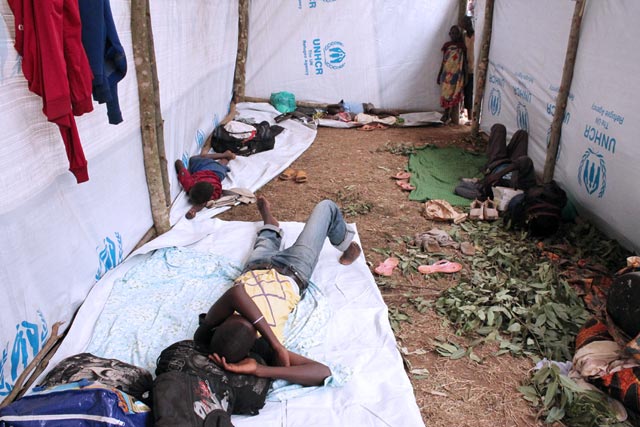 People who fled violence in Burundi now live in a cramped refugee camp in Rwanda. Photo by Caritas Rwanda

“Last Sunday I went with a small boat to the Kagunga area, which is the entrance point,” said Bishop Joseph R. Mlola of the diocese of Kigoma. “So many refugees–especially women, children and the elderly–were just standing along the lakeshore, waiting to be ferried to Kigoma and then to the camp.”

Caritas registers the refugees and gives them hot food provided by the World Food Programme. Caritas also provides water, hygiene and sanitation services in the transit centre. Caritas Kigoma may be called on to manage a transit centre that will replace the existing stadium centre.

“The situation is worsening,” Bishop Mlola said. “Just at the entrance to my residence day and night we are cooking what we can for the thousands of refugees stationed at Lake Tanganyika Stadium before they are taken to the camp at Nyarugusu, despite the cholera epidemic and the thousands of refugees who were there already.” Nyarugusu is an existing camp created to help refugees from other countries and earlier conflicts.

In Rwanda, where tens of thousands of Burundians are living in tents at the Mahama refugee camp, Catholic parishes have been collecting items like clothes, soap, and blankets to give to the camp residents.

“Mahama camp doesn’t have enough food rations, and the food isn’t adapted to vulnerable people: Burundians are not used to chewing corn kernels, especially elderly people and children under age 5,” said Aloys Mundere of Caritas Rwanda. “During a visit by Catholic bishops, many voices were raised to cry that they were going to die of hunger.” 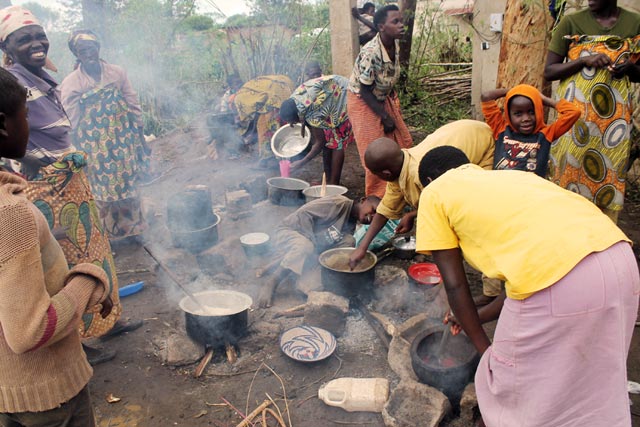 Refugees at Mahama camp also lack water, firewood, and medical care.  “Water is transported by trucks from more than 27 km away, while the wood is very rationed because camp area is in the driest, least wooded area,” continued Mundere. “Mahama camp is in a semi-arid area where it is very hot during the day and very cold at night.”

Caritas Rwanda is launching a EUR 280 000 appeal for an emergency 3-month project to give extra food to 3,550 particularly vulnerable refugees in the camp–especially children, pregnant women and HIV-positive people.

In the part of the Democratic Republic of Congo that is near Burundi, the diocese of Uvira is giving refugees essential items, supported by Caritas Spain and Cordaid (a Caritas member from the Netherlands). Inside Burundi itself, Caritas is helping wounded people pay for medical care and plans to stock food and medical kits for the future. Jean Chrysostome Ndizeye, director of programmes for Caritas Burundi, hopes some families in safer areas will agree to host refugees and the displaced. “Life in a refugee camps is a nightmare, but unfortunately not many people can accept the burden of other people,” he said. As for the hopes for peace in his country, “the situation is very changeable,” he said.

As the political situation worsens in Burundi, the flood of refugees to neighbouring countries keeps coming. “Caritas Kigoma staff are in the field day and night, but the number is big and we do not know how will it be in the near future,” said Bishop Mlola in Tanzania. “I have learnt that it is terrible to be a refugee.”