“We must keep the poor at the centre of our work as Caritas,” said outgoing Caritas president Cardinal Oscar Rodríguez Maradiaga at a press conference in Rome that opened the Catholic humanitarian network’s 20th General Assembly. On Tuesday, 12 May 2015, four panelists spoke about the Caritas mission and its plans for the coming four years. 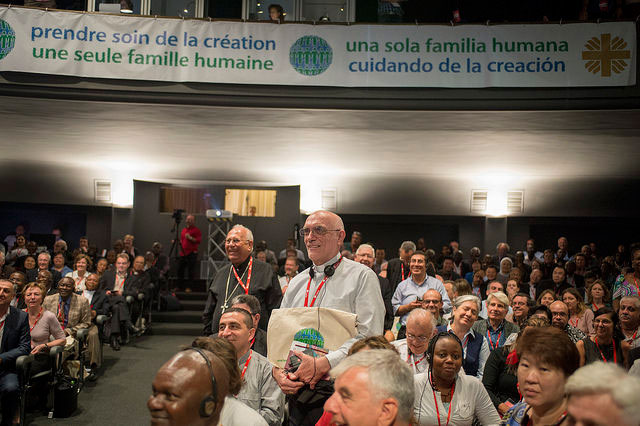 At the Assembly Cardinal Rodriguez Maradiaga spoke of the work of 164 Caritas members around the world who care for people in need, respond to emergencies, give voice to the voiceless, and reduce hunger and poverty around the world.  Reminding the audience that the world is suffering from war, indifference and hunger, he urged people not to forget the poor.

Michel Roy stated that “the General Assembly is a unique moment to celebrate who we are.” He explained that the General Assembly delegates will vote on new governance and will discuss a prepared Strategic Framework, which Caritas members worldwide will carry out over the next four years.

Father Gustavo Gutiérrez spoke of the meaning of the Caritas mission, saying “We have no charity without justice and justice goes beyond legality… People say we are living post socialist, post capitalist, post industrialist. People love to be ‘post,’ but we do not live post poverty.”

Panelists discussed Caritas efforts to reduce hunger around the world–particularly through its “One Human Family, Food for All” campaign–as a way of practising love for one another, and urged Christians to be Christ-like in relating to one another.

Panelist Haridas Varikottil said that the “One Human Family, Food for All” campaign has been a success, promoting sustainable agriculture, water access, and livelihoods. The campaign, which was launched in December 2013, brings together all Caritas members to work towards achieving these goals.

The Secretary General of Caritas Internationalis, Michel Roy, closed the press conference by inviting the media and friends of Caritas to the 2015 General Assembly in Rome.