Nepal grieves for its lost loved ones 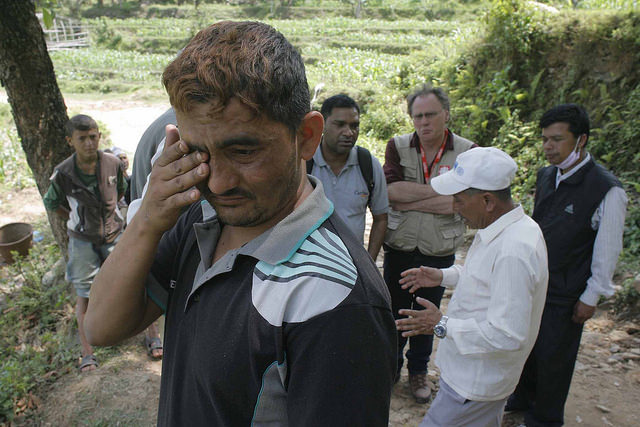 Ramjandra lost his wife and child in the earthquake. Credit: Matthieu Alexandre/Caritas Internationalis

The 26 year old agricultural worker was in his house in the Nepalese village of Taple in the district of Ghorka, just about 20 miles away from the quake’s epicentre. It was lunchtime and the family was just about to have some food.

Suddenly, Ramjandra felt the floor move under his feet, saw the bulb on the ceiling swinging to and fro and the windows tremble. “Run”, he shouted, “get out of the house as quick as you can.”

And that was what he did, expecting his wife Surasathi and three-year-old daughter Reshma to follow him. He was a few seconds faster. As Ramjandra escaped into the open air, the house collapsed. Surasathi and Ramesh could not reach the front door in time. They died under the rubble.

In Taple, the quake not yet a week old, many people are living in tents, even those whose houses are still standing. “We are afraid” is what I am told on and on by nearly everyone I talk to. People are afraid of the aftershocks occurring once or twice every day.

Ramjandra is unable to talk to me. His brother Mekh Badur tells me his story. Whenever Ramjandra tries to add something he bursts into tears. There are moments when a journalist has to stop asking questions. This is such a moment.

I can only express compassion and try to bring some hope into this tragic situation. I tell him the reasons why I am in the village, together with Anjan Baj, head of the disaster management of Caritas India, one of the active Caritas organisations in the disaster response in Nepal. Caritas, I tell Ramjandra, is there to identify the needs of the people and meet them.

Ramjandra has never heard of NGOs like this nor could he imagine he’d ever be in need of their help. I notice how the look in his eyes changes. You cannot expect a man who has just lost his family, his house and his property to smile. But a slight glimpse of hope is visible in his face when we explain what Caritas stands for and will do for the affected people.

Caritas after big disasters like this is reconstructing houses for the needy ones, we say. Caritas is caring for the livelihood of earthquake victims. Caritas is counselling the bereaved. “Thank you”, he says in a quiet voice. More he cannot say at this moment. We understand. It is still the time of mourning.

A few metres away we see his father-in-law performing “Kirya” – a Hindu ritual for close family members who’ve passed away. For 13 days of mourning, he will keep his head shaved and prepare water, rice and other food on the plain ground, as a sign to feed the souls of the dead, release them from their past and give them power for their new incarnation.

Perspectives for a new life – this is what Caritas, first of all with psychosocial support, can bring to Ramjandra to all those who suffer from the consequences of the “great quake” in Nepal.