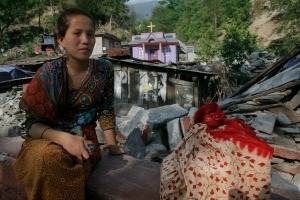 One of the survivors in Sindupalchok. Credit: Matthieu Alexandre/Caritas Internationalis

Eleven-year-old Deepeeka Silual’s father was killed by the debris of a collapsing Catholic church during Mass on Sunday 26 April when the earth shook for a second time in Nepal.

This time the epicentre was not in the area of Barpak and Gorkha as the quake the day before but in the district Sindhupalchok, north of Nepal’s capital Kathmandu, close to the city of Kodari.

Thomas Hoerz from Germany and Thomas Preindl from Austria met the family when they were travelling through Sindhupalchok from Kathmandu up to the Tibetan border to identify the needs of the people there.

“It was a horror trip”, said Thomas Hoerz: Completely destroyed villages, invisible under landslides; now and then just a single house standing, people living in makeshift tents or under corrugated iron roofs, a soccer field into a camp, accommodation made out the driver’s cabin of a wrecked truck. 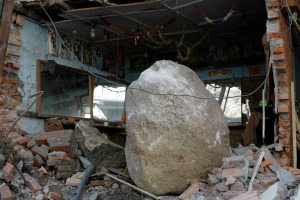 Tatopani itself, although it is very close to the epicentre, strangely is not so much affected by the earthquake but by falling rocks. Credit Matthieu Alexandre/Caritas Internationalis

Everywhere you see people digging in the rubble, desperately looking for loved ones lost or for their belongings, clothes, pots and pans, maybe only a spoon.

In one place an old man is apathetically sitting on a pile of stones, clinging to the doorframe protruding of the debris: “This was my front door, this was my house,” he said. “Nothing is left.”

Two weeks after the disaster, there are areas in Sindhupalchok which are completely neglected.

“Has really nobody come to your place up to now – to rescue or to help?” “No”, is the reply they receive, “You are the first ones.”

It was not possible before. The road to Tatopani, a village at the Tibetan border, was blocked by rocks tumbling down the slopes and was not cleared till 5 May – ten days after the disaster.

Tatopani itself, although it is very close to the epicentre, strangely is not so much affected by the earthquake but by falling rocks which bombarded the village. Through the windows and doors they made their way into the flats and smashed the interior. Rocks are all over the place, in the streets, on rooftops, in the houses.

“This was my front door, this was my house,” said one survivor. Credit Matthieu Alexandre/Caritas Internationalis

“The people have to live outside and urgently need shelter,” said Thomas Hoerz.

The trip up to Kodari and Tatopani took him and his Austrian colleague only to villages along the road. But what had happened to the villages and people up in the mountains of that area – villages you can reach only by helicopter or by a two or three days walk is still unclear.

Caritas, together with the local authorities, are determined to find out and to help as quickly as possible. It will be a big challenge to cover the villages which are so difficult to reach but Caritas is going to tackle it. With its focus on totally neglected areas Caritas sticks to one of its key principles: to help wherever it is needed most.