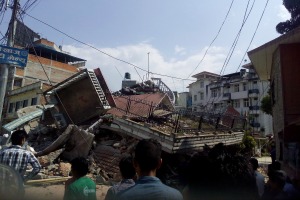 Collapsed near to Caritas Nepal office in Lalitpur Dhobighat in second earthquake.

Nepal’s Information Ministry is reporting that there are over 1600 people injured and over 39 deaths in many of the already severely affected districts.

Melville Fernandez, Caritas Australia Humanitarian Manager, currently in Kathmandu working with the Caritas confederation, reports, “I was on the second floor of the Caritas office at the time of the quake, surrounded by colleagues who have all experienced major emergency situations, yet for most of us it was the largest and longest tremor we’ve experienced.

“You could see the sway of the three story building, the ground rocked like we were out in a large ocean swell, which made it difficult to reach the evacuation point at the local Assumption Catholic Church. Local families were also gathered on the lawn, many now familiar faces to the Caritas staff and volunteers as the city remains on alert.

“Still unsettled by the deadly 7.9 earthquake just a fortnight ago, the local staff and volunteers raced to phone family and friends and get news on the epicentre and size of the quake. Many of them have continued working tirelessly through the last two weeks helping others, while their own homes and family members have been scarred by the quake,” said Mr Fernandez.

Caritas Nepal staff have checked surrounding blocks and there are reports that buildings which were cracked or damaged from the past shakes are now destroyed, including the Omkar Polyclinic Hospital.

Operations at the international airport in Kathmandu have been suspended. While details are still emerging initial reports indicate that there are several large landslides in Rasuwa, Nuwakot and Dolakh, with the worst in Sindhupalchowk on the Arniko Highway which connects Kathmandu to the Chinese border.

“We fear the landslides are going to seriously hamper already challenging relief operations in many of the remote villages. The Caritas confederation are supporting Caritas Nepal in a rapid response relief operation aiming to help over 175,000 in the next two months. We are prioritising shelter, water and sanitation materials, but after today’s shocks the needs will be even greater,” said Mr Fernandez.

“We are still sitting outside the Church a few hours later unsure of whether more shocks are on their way or not.We have closed the office and told staff to go home if they want, some have gone with tents, others wait here at the Church.”

The Caritas Nepal team of three in Sindhupalchowk managed to escape from the falling debris in the village that they have been working in for emergency relief. They reported that hundreds of people may have been injured in Chautra.

Kathmandu radio stations are reporting that the districts of Rasuwa, Nuwakot, Sindhupalchowk, and Dolakh have reported several landslides after today’s earthquake by FM radios in Kathmandu.

In India strong tremors were felt in the capital Delhi and the Northern states of Bihar, Jharkhand, Punjab and Uttarpradesh, the eastern state of West Bengal and the north-eastern states of Assam.

“Our Caritas family, especially Caritas Nepal staff and volunteers, and the affected communities, welcome and are thankful for the global outpouring of solidarity, prayers and donations to support their families at this unsettling time,” said Mr Fernandez.