In early March, Liberia was counting down to being declared Ebola-free. There had been no new cases for a week – the first time this had happened since May 2014 – and the last survivor was discharged from hospital in Monrovia. The borders had reopened, the curfew had been lifted, school children were back at their desks. Things at last were returning to normal, after almost a year of suffering.

But less than two weeks later, a new case was confirmed. It’s remained an isolated one, but the message is clear – vigilance against Ebola must remain high. The virus remains in survivors’ bodies for 3 months and in monkeys and bats for longer. But Caritas and its partners in the broader Catholic Church haven’t let their guards down as the epidemic has tailed off and has reached into Liberia’s remoter villages to spread the prevention message. 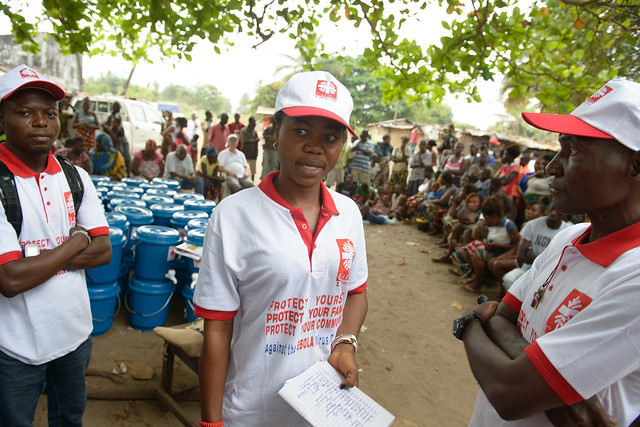 To help prevent the spread of Ebola in the future, Caritas staff come to Big Fanti Town, Liberia, right outside Buchanan, to promote better hygiene and distribute hygiene kits (buckets, 5 bars of soap per bucket, and 1 bottle of bleach per bucket). Photo by Miguel Samper/Caritas

In April, hygiene teams from the Ebola campaign delivered practical supplies and education messages to Grand Bassa and Bong counties – the first time some villages had been reached. The Catholic Church has often been the only institution able to access Liberia’s remotest areas. When dirt roads narrowed to footpaths, staff and volunteers walked for hours to reach communities in need.

Caritas Liberia – with the support of the Caritas confederation – has developed a simple but effective transmission prevention programme. Hygiene teams target a village to establish a safe cleaning system. Each village is given 50 plastic water holders with 5 bars of soap and a bottle of bleach allocated to each bucket. Team members demonstrate good hand-washing techniques, how to treat water with bleach to make it safe and give out information about how to avoid transmitting Ebola. They explain to villagers that the old methods – such as adding salt to hot water – won’t kill the virus.

When the Caritas teams arrive, as in the village of Balakalata in April, everyone is waiting. Caritas has drawn on its experience fighting HIV in rural areas where radio broadcasts and phone messages have spread the word that help is at hand. The start of Mass has also been used as a time to spread information about transmission. It’s a very serious time – Ebola has taken more lives in Liberia than any other country in West Africa suffering from the epidemic – at least 4 500. 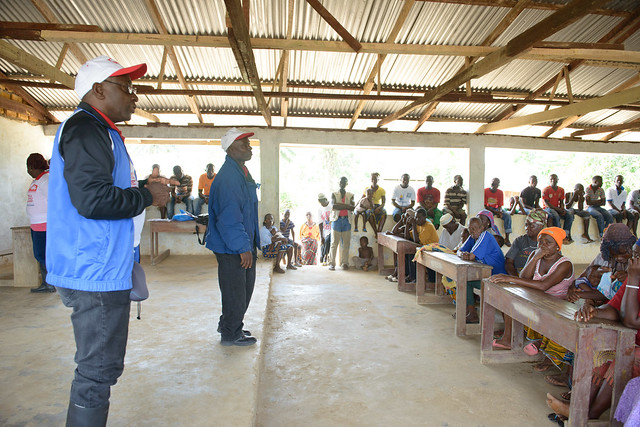 The village of Mawah was particularly hard hit by the Ebola crisis, with 36 deaths and 12 survivors. Photo by Miguel Samper/Caritas

In another village – Mawah – it’s especially important to keep pressing home the message of bleach, soap and safety. At the height of the outbreak here, 36 people died out of the 48 who caught Ebola – one of the very worst fatality rates.

The devastation in Liberia also reaches beyond the loss of loved ones. In Big Fanti Town, not far from the regional capital of Buchanan, people listen closely to Caritas’ hygiene advice, their worries clearly written on their faces. Ebola has had a huge economic impact here.

In the market, many stalls are empty – traders don’t have money to re-open their businesses as they spent everything on medical care. Others, like Momolu Sirleaf, are nervous about travelling too far now. Momolu used to take fish to sell in Monrovia but now he sticks close to home, where his fish fetches a lower price.

Partly due to the legacy of Liberia’s 14-year civil war, 8 out of every 10 people didn’t have a job before Ebola came, but things are worse now. Farmers who were quarantined have lost their harvests and many have eaten their seed stocks to survive. Caritas is distributing new seeds and tools and is working in partnership with the United Nations World Food Programme to hand out rations to the most vulnerable until people can get back on their feet and into their fields. 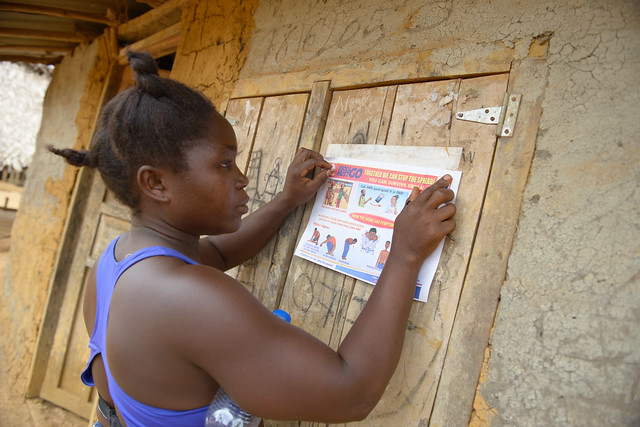 Caritas has drawn on its experience fighting HIV in rural areas where radio broadcasts and phone messages have spread the word that help is at hand. Photo by Miguel Samper/Caritas

Liberians are resilient people though and women like Netic Sayon have managed re-start their small businesses. Netic runs a food stall and has become very aware of hygiene, thanks to a visit to her village of Kobilue by a Caritas team.

Netic is careful to keep her dishes washed with water containing bleach and to wash her hands very well with soap. She knows she has a big responsibility to her customers and to herself if she wants to stay healthy and in business.

If Ebola were to return and she became infected, even if she survived Netic would come up against the problems facing many survivors. Customers stay away and there are sometimes rumors that “dark forces” have protected certain people.

Caritas will be working hard in the coming months to break down this stigma – again using the strategies it developed in fighting HIV. We want to ensure that Ebola survivors are welcomed back into their communities and that vigilance remains high against the virus returning.