Mina Shakya lives in Bungamati, around 15 kilometres from Kathmandu. This village, which was seriously damaged by the violent earthquake on 25 April, is the birthplace of the god Rato Machhendranath. The earthquake occurred during the festival dedicated to the patron god of the Kathmandu Valley. The temple and many houses collapsed. Several volunteers are working hand in hand to clear the rubble, wearing masks to protect themselves from the dust. Mina lives together with her husband, her daughter, her mother-in-law and her brother-in-law’s family. The family makes a living by making statuettes, which Mina sells in Patan, the city of temples. 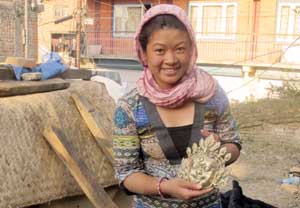 Mina Shakya’s family sold statues as livelihood. During the earthquake they lost most moulds. Photo by Caritas Switzerland

“During the earthquake I was in Patan to sell statues. I waited there until it was over. When I got home I saw that our house had been destroyed during the earthquake. Luckily, no one in our family was injured. Since then we have been sleeping under a tarpaulin in the marketplace, together with many other people. The nights are cool and there has been a lot of rain. In our village, the earthquake killed four people and several others were injured.

All our rice stocks were buried. It was a hard job to dig them out. The neighbours helped us. We managed to save the gas cylinders and cooking utensils. However, we have lost the old moulds for the statuettes. My husband made them, and it takes a long time. We managed to salvage the brass figurines and put them together under a roof section in the inner courtyard. There’s a lot of solidarity. Some Nepalese have donated money to buy food which was distributed.”

Rajesti Shakya lives next to the temples of Patan. He specialises in adding the finishing touches to statuettes, which he sells in his shop on the ground floor. Patan, which is five kilometres from Kathmandu, is one of the three royal cities of the Kathmandu Valley. The city is renowned for its many Buddhist and Hindu temples and its monuments, several of which have been seriously damaged. The Oku Bahal neighbourhood, where Rajesti lives and works, suffered relatively little damage, as the artisans take care of its maintenance. 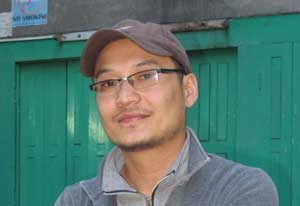 Rajesti Shakya and his family slept in a Tibetan monastery during the earthquake. Photo by Caritas Switzerland

“I had just finished eating when the violent earthquake struck. I was in my shop and ran into the house which is supported by pillars. My wife and two sons, 10 years and 18 months old, were in the apartment on the second floor. I’ve never had such a terrible experience in my house. I’ll never forget it.

The first night we slept in a Tibetan monastery. The second night, there were so many people that the men stayed outside, standing in the rain, covering their heads with plastic bags. I didn’t sleep a wink. It was exhausting. We made makeshift beds for the children with desks. Then we returned to our apartment, but there was a strong aftershock. Now we are sleeping in another Tibetan temple with a lot of other people. We are extremely frightened every time there’s a new aftershock. Experts from our consortium have checked the apartments and said there’s no risk of their collapsing. But I’m afraid to go back. I’ll try and sleep there tonight.

Luckily, the first aftershock occurred on Saturday at midday during holidays. People had finished eating and were in the streets, and the schools were closed. Otherwise, there would have been a lot more victims.”