A childhood on the streets in Djibouti

“Caritas is our home”. This is what a small group of children revealed to me one hot January morning in Djibouti. I say “hot” even though, as in Europe, January is part of the country’s coolest season. It’s a pity that for them “cool” means 28-30° in the sun. This is one of the hottest countries in the world, on the coast of the Horn of Africa. Djibouti is such a small country that many people haven’t even heard of it. Yet it’s extremely important strategically, which is why waves of migrants from neighbouring countries, especially Somalia and Ethiopia, aim to get there. This is not something new. Migrants also flee to Djibouti from protracted wars and grinding poverty, in the hope of finding an easier life in a country that, compared with its neighbours, is slightly better due to the presence of organisations from around the world, especially military and UN personnel, and therefore it’s easier to get a little money from begging or by offering services such as shining shoes or washing cars. 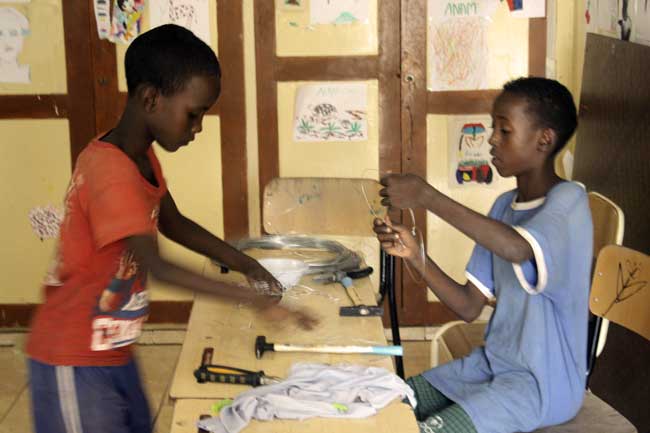 Caritas Djibouti gets a large number of street children into basic schooling and a small group of adolescents into a vocational college where they can learn a trade. Photo by Van Wyuytswinkel/Caritas

The many migrants are of all ages. The ones whom Caritas Djibouti looks after are between 6 and 17 years old, although it’s difficult to determine their age in the absence of documents to prove it. They flee for the same reasons as adults, or because they are the youngest children in the family, resources are lacking to look after them too.

This is the situation of youngsters and street children at the Caritas day centre. Every day around 80 of these children show up on the dot of 8am to be welcomed in a small space that provides food to the guests, the chance to wash themselves and their clothes, a small infirmary and a few activities designed for them, such as literacy classes, do-it-yourself, sport, sewing, etc. The children are usually healthy, apart from some with curable diseases that are common in Africa, often including skin infections. In the most serious cases the children are taken to a hospital that has a healthcare agreement with Caritas.

Some children come to the centre more often than others, but almost 450 are registered (namely they have been to Caritas more than once). The children live on the streets, on the beach or in front of a supermarket or restaurant. They have no documents, so they have little opportunity to be fully part of society. Some of the children were born in Djibouti and have Djibutian or foreign parents, while others arrived in Djibouti alone from Ethiopia and Somalia. They have grown up quickly but are still children, although their situation forces them to get by, to find a way of earning a little money (the famous 20-30 cents per day that is given to the workers who take care of them while they are at the centre) and a means of survival. When they arrive at Caritas they go back to being children again. Playing and seeking affection are high priorities, as well as human support.

Working at the Caritas centre is upsetting and fascinating at the same time. It’s upsetting to hear the street children’s stories, and fascinating to see how they manage to survive and grow up like all their peers. It’s surprising the extent to which boys outnumber girls. This is for various reasons, mainly due to the fact that girls are often kept at home to help with domestic tasks, and therefore they are not allowed to leave as easily as the boys are. Unfortunately, the girls who live in the streets are sometimes picked up by the police to clean their offices, and then released after a few hours. 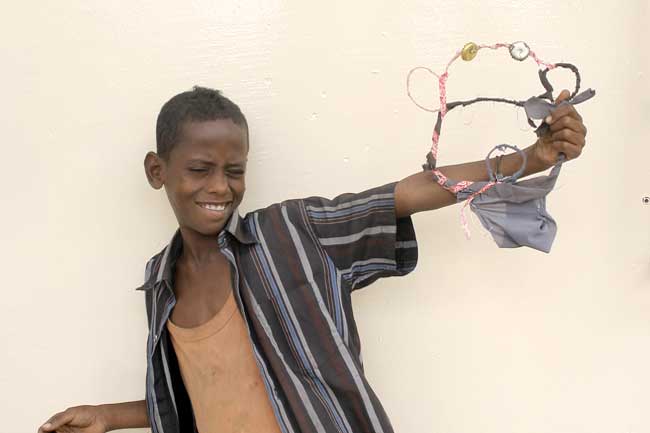 There are also cases like little Khalifa, an 8-year old boy who naively left Ethiopia with his friends as a game, only to find himself in world that feels alien to him and where he doesn’t want to live. He left because his friends persuaded him to try his luck, without reflecting too much on such an adult decision. Maybe he was expecting something different, or maybe he thought it would be easier to go back home. Caritas has also started working on this, although unfortunately its even difficult to send children back to where they came from, as a long process of support and reintegration within their families of origin is required. What has been achieved, however, is to get a large number of children into basic schooling and a small group of adolescents into a vocational college where they can learn a trade. Nevertheless, all these minors remain illegal.

Caritas Djibouti is the only facility in the country that looks after these children, while the number of minor migrants is constantly growing and cannot go unnoticed. The work Caritas does helps a great deal, but the problems underlying the situation need to be resolved, as reality cannot be hidden and should be faced up to, at national as well as other levels. In my opinion, the most pressing issue is documentation, which doesn’t exist for too many new-born children. Unfortunately, not having an officially recognised identity means not having a place in society, neither in one’s country of origin nor in the host country. Djibouti should not be left to tackle this issue on its own. The common aim and will of the other countries involved, which in this case are very close geographically, is also required. Guaranteeing a dignified future to those who have the courage to try and build one for themselves should be among any country’s priorities, so that “their home” is not only the centre where they spend a few hours, but the entire society in which they live.