As Afaf Ngor prepared her fields for planting, she gazed at the ruins of what used to be her house in the village of Mading Achueng in Abyei, a contested region on the border of Sudan and South Sudan.

“Life was good here until the Arabs came and drove us out,” said the Dinka Ngok woman, who fled with her family in 2011 after an attack by militias supported by the government in Khartoum. “But now we’re starting again with the help of the church. We love our land and don’t want to leave it again.” 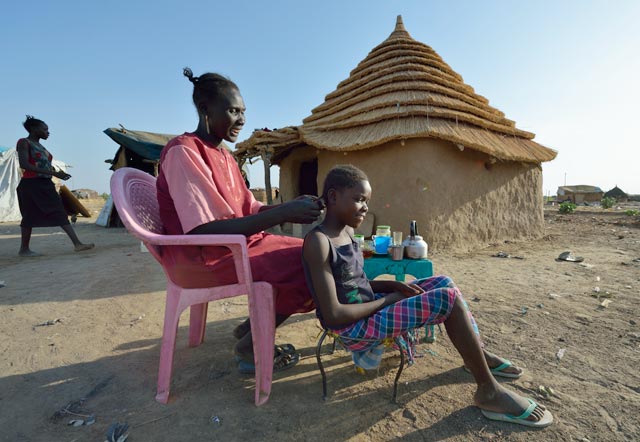 Caritas has helped over 40 000 people including Alij Kan Lual, a widow, and her daughter Amana, 9 come home. Photo by Paul Jeffrey/Caritas

Under the terms of a 2005 peace agreement, a referendum of Abyei’s residents was supposed to decide whether the area would remain part of the north or become part of the eventually independent south. Yet that vote never happened, in part because the government in Khartoum insisted that the nomadic Misseriya, who spend part of each year grazing their animals in Abyei, be included. The Dinka Ngok, who compose the vast majority of Abyei residents and favor alignment with the south, insisted that only permanent residents could vote.

The debate ended when Misseriya militias and northern troops attacked Abyei in 2011, driving more than 100,000 people–including the two priests who serve the Catholic parish–to the south, into what became a sprawling refugee camp in the town of Agok. Displaced along with the people they serve, the two priests built their own mud-walled huts near an open-air chapel and erected some tattered UNICEF tents–and eventually some permanent buildings–to house classes of the church-run primary school.

It’s a far cry from the church compound in Abyei town, some 45 kilometers to the north, with its large sanctuary, parsonage, guest house, school classrooms and a warehouse. Yet those buildings remain in ruins, looted and burned by the northern attackers.

[Tweet “Fr Kuol: “We have to start with people making peace at the grassroots, on the ground”#Abyei”]

In the past four years, however, people like Afaf Ngor have drifted back home, preferring to risk further attacks than to remain in crowded Agok. Yet unlike many other conflict zones around the world, Abyei is not filled with non-governmental organizations providing assistance to the population. Many NGOs are afraid that working in Abyei will anger government officials in Khartoum, who could then deny them access to Darfur and other troubled areas.

That leaves Caritas South Sudan and the local Catholic parish to provide much of what is needed. With funding from the international Caritas network, the church has accompanied the people returning to their burned villages. The church is drilling new wells to replace those that were destroyed by the north when it withdrew. It has swept up the ashes and rebuilt clinics in villages like Mading Achueng to which people are hesitantly returning. It is providing seeds and farming tools so that people like Afaf Ngor can feed themselves. It is training teachers for the schools that are slowly reopening, a critical task given the transition from teaching in Arabic (the language of Sudan) to English (the language of South Sudan).

“Even though we are forgotten by many, we nonetheless know that God is with us. And we receive help from people all over the world to help us feed those who have been displaced and are waiting for peace,” said Father Karlo Kaw.

Amid those who remain in Agok, where the population has recently swelled with newcomers displaced by fighting elsewhere in South Sudan, the church continues its pastoral presence, helping people maintain hope that they can all one day return home. 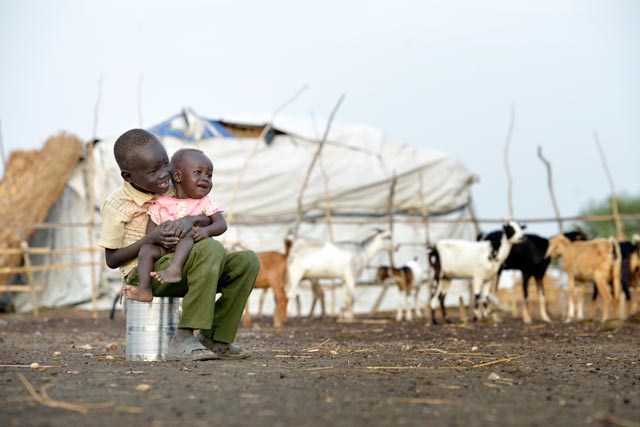 A boy cradles his little sister in a displaced persons camp in Agok, South Sudan. Tens of thousands of residents of Abyei, a contested region along the border between Sudan and South Sudan, remain displaced in Agok. Photo by Paul Jeffrey/Caritas

“People want to go home. Agok is crowded. The ground turns to mud when it rains. Back home everyone has a plot of their own to farm. But they’re afraid of another attack from the north so they remain here. And as long as they are here, the church will be here with them, even if the rest of the world doesn’t seem to notice,” said Father Biong Kuol.

Abyei’s future continues to be debated by leaders from Sudan and South Sudan, but many in Abyei aren’t hopeful that will produce results. As a result, the church is working on an alternative track toward peace.

“We have to start with people making peace at the grassroots, on the ground, without involving those politicians,” said Father Kuol. “We can leave the big issues to the politicians, but on the ground we are neighbors and we have to live in peace. So we’re trying to make small agreements between communities, creating a space for peace without the involvement of governments.”