The Intergovernmental Panel on Climate Change (IPCC) is considered the leading authority on the science of climate change. It consists of 2,000 scientists from over 150 countries. Its report released in 2013/14 – the Fifth Assessment Report (‘AR5’) – provides the most detailed and up-to-date view of the state of our climate. The findings of the IPCC are agreed upon by all 195 countries that make up its membership.

FACT: The climate has changed throughout the earth’s history but the huge changes happening to our climate today are not due to natural causes. Natural variations happen over millions of years. Scientific research shows us that the last ice age ended around 11,000 years ago and since then the earth’s climate has been relatively stable at an average of around 14°C.

However, over the course of the last century our climate has started to change rapidly, with an unusual increase in global temperatures, accompanied by extremes of weather. There is overwhelming scientific evidence from the IPCC that suggests this is due to increased amounts of greenhouse gasses in the atmosphere. Greenhouse gasses occur naturally in the atmosphere but human activity, such as burning of fossil fuels such as coal and oil, increase them. 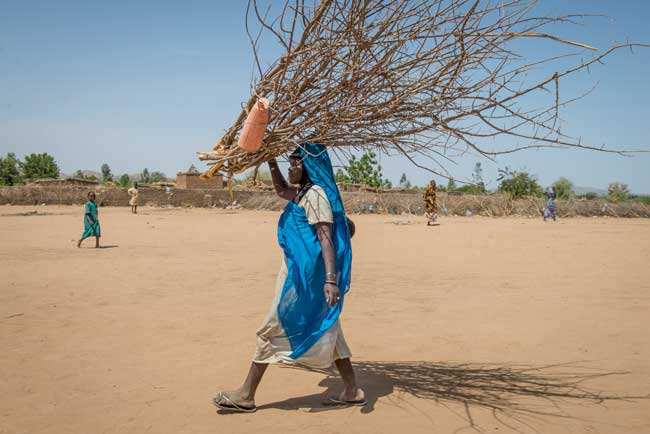 Photo by Annie Bungerouth/ACT-Caritas in Darfur

MYTH 3: The globe has stopped warming.

FACT: Temperature records clearly show the world has continued to warm over the past century, and continues to do so. The intensity of this warming varies but the trend is upwards. For example, the past 30 years have been the warmest experienced by the northern hemisphere during the last 1,400 years. This warming has started to impact upon the climate system and is projected not only to increase global temperatures, but change patterns of rainfall and increase extreme climate events. The effects are now being felt around the world.

FACT: On average volcanoes emit less than 1% of the CO2 humans put into the atmosphere in a year. This percentage is growing smaller as emissions from human activities continue to rise.

MYTH 5: Carbon dioxide is not a pollutant; it’s natural and essential for life.

MYTH 6: Far back in time, global warming episodes had nothing to do with carbon dioxide levels.

FACT: The role of carbon dioxide in the planet’s history is reasonably well understood. While changes in CO2 levels are certainly not the only force at work on the climate, the current changes in climate could not be explained without an understanding of the warming impact of carbon dioxide.

MYTH 7: Some countries have always had droughts, heat waves and extreme weather. There is no link to climate change.

FACT: The effects of climate change are resulting in increasing extreme events such as heat waves and droughts, which in turn affect our livelihoods and health. These climate extremes are projected to worsen over the next decades.

MYTH 8: Global warming is good for us!

FACT: Without intervention climate change will make life significantly harder for many people, especially the world’s poor who can least afford to adapt. If the IPCC predictions become true, climate change will everything from the food supply to global health. The brunt of the effects of climate change in the future, like now, will be borne by the poorest and most vulnerable communities on earth.