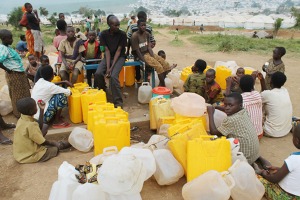 There is a lack of water in Mahama camp in Rwanda, where refugees must wait 8 hours. Credit: Caritas Rwanda.

“I wish there was peace so that we can return home,” said one Burundian refugee, an old man in his 80’s. “I hope that we continue to receive help. I’m disabled. I’m alone. Nobody else is going to help me.”

Around 30,000 people have fled Burundi for Rwanda in recent weeks following the worst outbreak of violence since the end of the civil war in 2005.

“Any help would be welcome, because we need it,” said Jean Damascène Musoni, a community leader of the 27,000 Burundian refugees sheltering in Mahama camp in Rwanda.

An unusually high proportion of the refugees are children. About 1000 of the children have come unaccompanied by parents or guardians.

“The majority of them are children or young people,” said Jean Damascène Musoni. “They need help, especially with clothes, soap and other hygiene goods.”

The crisis was ignited when serving President Pierre Nkurunziza launched a bid for a third term in office, with polls scheduled for 15 July.

“We don’t want to be repatriated back home,” said camp resident Nyandwi Maurice. “We’d rather go anywhere else because the situation is very bad there.”

The hillside camp is neatly arranged, surrounded by green. But life is still very difficult, especially because of a lack of food and poor healthcare. There is only one medical centre in the camp.

“We’re in a very bad condition,” said Niboyi Séraphine, a sick 38 year old mother who fled Burundi with her only child. “We don’t have enough food for the whole month.”

Caritas Rwanda is running a EUR 280 000 appeal for an emergency 3-month project to give extra food to 3,550 particularly vulnerable refugees in the camp–especially children, pregnant women and people living with HIV.

Part of the problem is that local food of corn kernels is hard to digest for the Burundians, leaving some with stomach problems.

“80 percent of refugees from Kirundo, a region where we are not accustomed to eating corn kernels,” said Terence Nzohabonayo, a camp representative. “They prefer bananas, sweet potatoes or cassavas.”

There is also a lack of firewood to look the food. “We want to learn how to use wood more economically so we can preserve the environment,” said Terence Nzohabonayo.

Catholic parishes in Rwanda have been collecting items like clothes, soap, and blankets to give to the camp residents. “Caritas has recently come with significant assistance in terms ,” said Terence Nzohabonayo.

“We hope Caritas brings us more clothes because everyone has not benefited. Clothes preserve the dignity of the human person.”