Painting by numbers in Ukraine 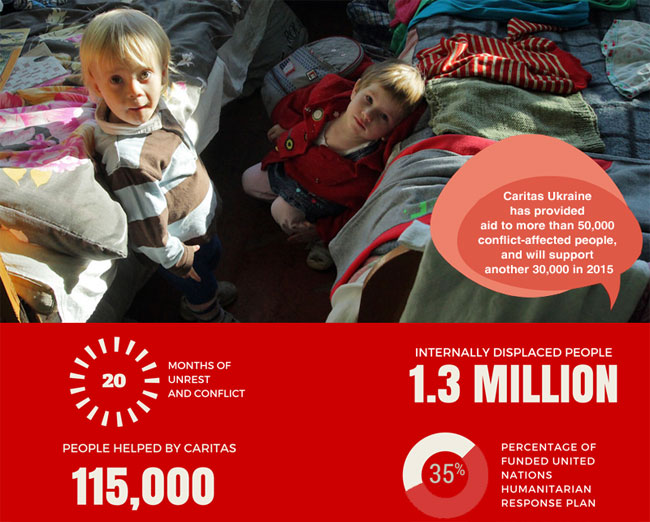 If you could tell the story of Ukraine in numbers they’d be:
20 months: of unrest and conflict
5 million: people in need of help out of 45.5 million
1.3 million: internally displaced people
115,000: people supported by Caritas member organisation in Ukraine at the moment

Another number you could add to the list is 35 percent: the amount of funding the United Nations Humanitarian response plan has received so far of the US$316 million it needs.

Erik Heinonen is a programme manager for Catholic Relief Services (CRS – a US member of Caritas) in Ukraine. He says, “We’re not doing enough. The humanitarian catastrophe has not really been talked about or covered: 1.3 million people have left their homes behind and everything they had.”

Caritas mobile teams have been helping conflict victims since the beginning of the crisis. Not just food and water but also medicines for chronic diseases and counselling to help people overcome the trauma of war. Where necessary, it has given cash grants.

Caritas Ukraine has provided humanitarian assistance to more than 50,000 conflict-affected people, and will support another 30,000 during the remainder of 2015. In the past month, Catholic Relief Services and Caritas Ukraine have opened six child-friendly spaces to support trauma counselling for up to 500 children.

“These are kids who hid in bomb shelters, who have seen and heard gunfire,” says Heinonen. “What we’re doing is much closer to creating preschools, kindergartens and after-school programmes. One goal is to help kids integrate into new communities, to create normality and stability in their lives.”

The lack of financing for projects in Ukraine one of the main obstacles to Caritas member organisations helping the people. One of the reasons is that the crisis is often depicted as a political crisis in the media instead of a humanitarian crisis in which millions of people are suffering.

Kevin Hartigan, regional director for Europe, the Middle East and Central Asia for CRS says. “Much more could be done for [people] in Ukraine if we had more resources. Because of the very limited funding available, we and other relief agencies have had to target only the most vulnerable families.”

Caritas will continue to provide help to those most in difficulty in the war-torn east of Ukraine such as emergency food, water, living and shelter supplies to families – and help them get back to work so they can support their families.

“Children are happy” – three words that say so much more than the numbers of the Ukraine crisis.