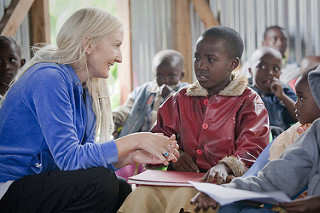 Claudia Carroll and Annet Adhiambo (11) at St. Peter’s Junior School, Nanyuki, central Kenya The school is part of the Living in Faith Association supported by Trocaire (Caritas member in Ireland) and was set up by Emily Aoko Otieno on land outside her house to help children from the community who are affected or living with HIV/AIDS to receive an education. Photo by Trocaire

When words of greeting, encouragement, and prayerful solidarity were read out from Pope Francis, strong applause was heard among the six thousand participants in the Opening Session of the International AIDS Society’s 8th Conference on HIV Pathogenesis, Treatment and Prevention. Through the Vatican Secretary of State, Cardinal Pietro Parolin, the Pope expressed his “esteem for their work and the dedication it requires.” He gave thanks for the lives saved by Highly Active Anti-Retroviral Treatment (HAART) and for the use of “Treatment as Prevention” and noted that such efforts “give witness to the possibilities for beneficial outcome when all sectors of society unite in common purpose.” Finally, he assured the participants of his prayers “that all advances in pharmacology, treatment, and research will be matched by a firm commitment to promote the integral development of each person as a beloved child of God.”

This letter was addressed to Dr. Julio Montaner, Director of the British Columbia Center of Excellence in HIV/AIDS at St. Paul’s Hospital, Vancouver, and Co-Chairperson of the Conference. Dr. Montaner closed his reading of the Pope’s letter with tears in his eyes and stated, “I love Pope Francis!…If he ‘gets’ it, on the need for early treatment of HIV, why are some scientists still debating this?”

St. Paul’s is a Catholic-inspired institution, founded by the Sisters of Providence, and has distinguished itself for HIV care as well as cutting-edge scientific research to demonstrate that early diagnosis and treatment of people living with HIV not only saves lives but also is 96 percent effective in preventing the further spread of the disease. Thus the major focus of this year’s Conference is “Treatment as Prevention”. International public health experts affirmed that they now have indisputable scientific evidence that HIV/AIDS could be ended as a public health emergency by 2030 if at least 90 percent of all people living with HIV could be properly diagnosed, and started on effective anti-retroviral treatment to lower the amount of virus in their bodies and thus drastically decrease the number of new HIV infections in all parts of the world.

In order to accomplish these ambitious goals, however, all key stakeholders will need to engage in outreach to the most poor and vulnerable populations that still do not benefit from HIV treatment. In his opening address to the Conference, UNAIDS Executive Director, Michel Sidibé celebrated the fact that 15 million people now are receiving treatment but reminded the participants that another 22 million still do not have access to these medicines and that many of these do not even know that they are infected.

Dr. Montaner invited Caritas Special Advisor on HIV and Health, Msgr. Robert Vitillo to make a presentation on the accomplishments of religious-inspired organizations in facilitating HIV testing and treatment, particularly in sub-Saharan Africa, which remains the epicenter of the disease. Msgr. Vitillo shared data from a survey undertaken during the past year. He noted the impressive outcomes reported by Catholic Relief Services (CRS – Caritas member organization from the USA) from its 9-year coordination of the AIDS Relief Programme in 10 countries of the world. During that time period, CRS channeled more than US$740 million in support from PEPFAR (the US President’s Emergency Plan for AIDS Relief) Programme. These services reached 713,000 clients, and were able to enroll 395,000 on treatment. Training of 30,000 staff was undertaken; most of the staff and volunteers worked in community-based settings. CRS reported very low statistics on clients lost to follow-up and on patient mortality. Most significant was the fact that more than 85 percent of clients had significantly low amount of virus and thus were less likely to pass the infection to other persons.

Msgr. Vitillo also reported impressive results from the Christian Health Association of Zambia and from the comprehensive DREAM Project sponsored in several African countries by the Comunità Sant’Egidio.

In so many ways, the main theme of the conference was summed up with a quote from a young Thai girl, the patient of one of the presenters at the opening plenary. Years ago, children living with AIDS were rarely able to survive past their second or third birthday. Now this child, who has been on treatment for the last six years could dream as follows: “For my future, I would like to have a family, house, rice farm and money which I earn for a living. I am on the promising way of hope.”