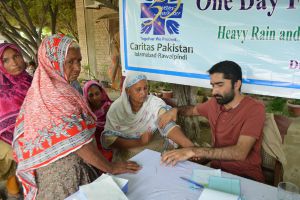 Lucia Bibi was buried alive with her children after the thatched roof of her house collapsed during a heavy downpour.

“It was one at night and the third day of the rains. I was sleeping with my two daughters and a son when everything came down on us with a thump. I clutched straw with my left hand but when I tried to raise my right arm, I just couldn’t move it”, said Bibi, 43.

The widow was pulled out by her neighbors after a struggle of 30 minutes and now has two fractures. Her eldest daughter, who was taken out after an hour, cannot walk ten days after the incident due to an injure leg.

“I prayed for penance during all that time. I prayed for a miracle. Everything in our room was damaged, even the wooden beds on which we were sleeping were broken”, she said. “But we are glad to be alive. My faith is stronger and I will give the testimony in our Church.

The family of Lucia now lives under bamboo trees in front of their damaged abode. The salvaged items are now piled up in one of the roofless rooms and are covered with polyethylene sheet. Her house was among 40 other buildings destroyed by lashing rain in Mariakhel village, Punjab province, earlier this month.

National Disaster Management Authority says 18,206 houses have been damaged while 202 people have died across country as a result of flash floods.

“The weather pattern has become very unpredictable. Continual showers are damaging the standing cotton crop. I had to temporarily settle a family in the store of our Marian Grotto after their house flattened. They have five children and no where else to go”, said Fr Anthon IIlyas, who hosted 13 August medical camp at the parish house.

Caritas Pakistan office in Rawalpindi-Islamabad diocese, the main organiser, has planned three such camps and a relief distribution in the flood / rain affected villages of Mianwali district this month. “The Doctor has arrived, the free medical camp has started. Bring your identity cards if you wish to take the medicines”, announced the catechist in a loudspeaker as Caritas workers arrived for their first intervention in the disaster this year.

A team of two nurses and a doctor treated 128 patients, including Lucia and her mother in law. The medical records showed flood related disease like skin allergies, fever and diarrhea along with chronic illness. Elderly women placed their hands on worker’s heads and blessed them while leaving the Church premises.

Lucia requests for a roof where she can sleep safely with her children. All her savings are already spent on the treatment of her husband who died this January.

“Many families are still without shelter and more rains are coming. I visited villages drowned in river and have seen people in difficult situation. I request all Caritas members and well wishers to join hands with us in saving lives and people who have been affected”, said Amjad Gulzar, Executive Director.