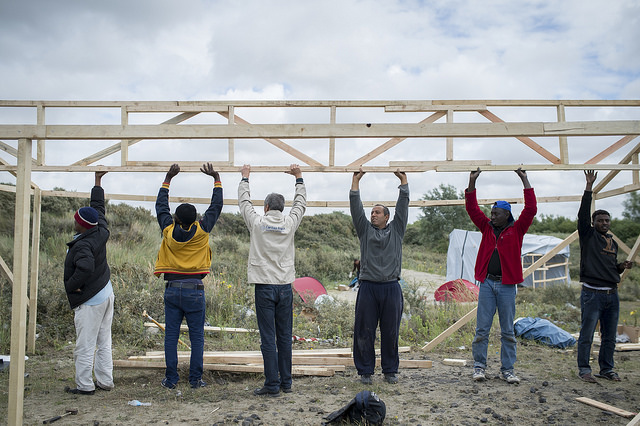 Caritas provides shelters kits but leaves the building to the residents in a camp for migrants in Calais, France. Elodie Perriot/Secours Catholique

There are many nationalities among the 2000 plus people living in the ‘Jungle 2’ camp near the northern French port of Calais. Sudanese, Afghans, Syrians and Eritreans: all united by histories of conflict and poverty that propelled them from home to here.

The camp occupies am old landfill. Clouds of sand blow through the sparse vegetation, shaking the plastic sheeting of the tents. It’s a long, hot and dusty 7 km walk into Calais. It feels like the end of the world, rather than just the end of the line.

Nobody would choose to live here, yet the camp is seen a huge improvement because it has been accepted by the local authorities.

“For years, migrants set up makeshift shelters that could be destroyed in a moment by the police,” said Mariam Guerey, who works for Secours Catholique/Caritas France in Calais. “It changes everything when you are no longer wondering where you are going to sleep.”

Hammer in hand, Amjaad is finishing the frame of what will be a community meeting room in the camp. Known as “The Builder”, he has complete over a hundred structures in Jungle 2. Caritas provides shelters kits but leaves the building to the camp residents.

“We quickly realised that most were very competent,” said Pierre Gobled, who leads a team of volunteers. “We just give a quick look. Sometimes when they finish, they proudly show us what they built.”

Alongside the shelters, restaurants and cafes have also been built. “Creating collective places is very important,” said Vincent de Coninck, who leads the migration work for Secours Catholique.”There is a need for social life. That’s why they have built five mosques, a church, two schools and several restaurants. They are places of human encounter.” 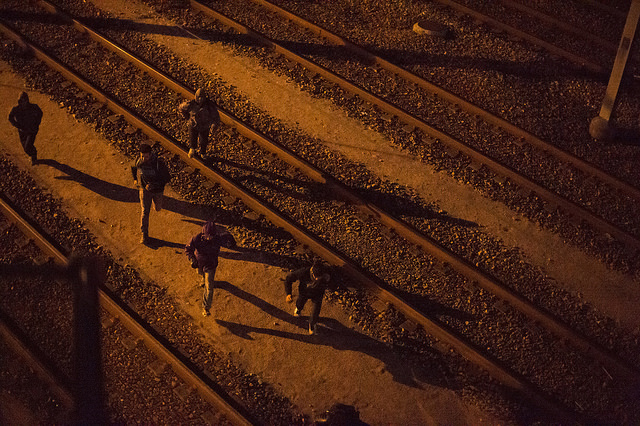 Calais is the last stop for many migrants before attempting the dangerous crossing across the English Channel. Credit: Elodie Perriot/Secours Catholique

One of the most beautiful is a church built by Eritreanss steeple rises to over five metres.Perhaps it’s visible to the holiday makers in their cars as they drive past along a ring road protected by 4 metres high, barbed wire topped fence. The fence is to stop the migrants from smuggling aboard vehicles. Calais is a bustling port for holiday makers and commercial lorries. It’s also the jumping off point for migrants wishing to reach the UK.

Adam is one of a group of Sudanese and Chadians living in Jungle 2. Travelling through Libya, across the Mediterranean to Italy, and then north, they reached Calais 8 days ago. This evening they will cross the barriers to the Tunnel: “And then we’ll see.”

Houmed, 17 from Eritrea, had the same plan. His funeral was held a few days before these interviews took place. More migrants have died trying to reach the UK in June and July 2015 than during the last six months of 2014.

“Only those of his group came to the funeral,” said Mariam Guerey. “I wish others had come to show solidarity.” Building a sense of community is difficult across language and cultural barriers, where people come and go, and where survival is the priority.

Amjaad is working with an Egyptian and some Sudanese to finish the meeting room for the migrants. The aim is provide a space for representatives of the different nationalities to come together regularly as a “Council ” to discuss how to improve the camp.

“Migrants see the importance too when we obtain through the authorities water points, rubbish collection and electricity. There is something concrete for them,” said Vincent de Coninck.

The idea of the meetings is also to address broader policy issues that affect the migrants on their journey, such as on asylum applications in the EU so that those policies in turn can be changed.

“It is hard for them to be interested when they know it will take years to change,” said de Coninck. 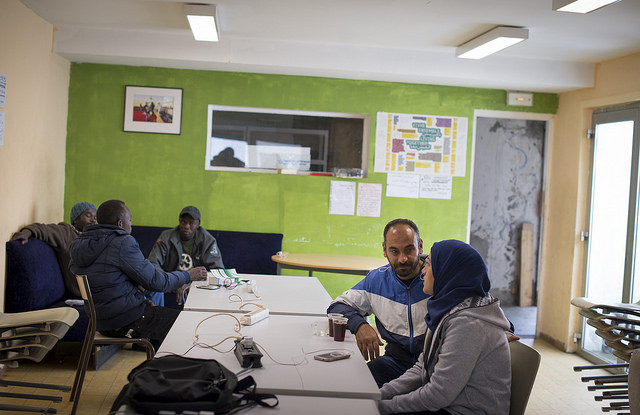 Abderraouf is student from Sudan. “It’s important to create a meeting place,” he said. “A place where one can trace the needs and problems in the camp, which can also be the reflected back to the government.”

The young Sudanese has been stuck in Calais for five months. He has given up risking the crossing to the UK and is instead learning French so he can help the migrants communicate with the authorities and with associations.

According to the regulations, he should seek asylum in Italy where he was fingerprinted for the first time. But he is reluctant to go home. “When we arrived in Italy, we felt like it was Darfur,” he said.

Amjaad “The Builder” will not be taking part in the council meetings, but only because they happen when he takes another resident, “ a guy completely destroyed by what he has experienced”, to see a psychiatrist.

Jungle 2 is maybe a short stay for many of its residents, but their voyages of hardship and abuse, of kindness and companionship, will stay with them forever.