Migrants and asylum seekers are vulnerable to modern slavery 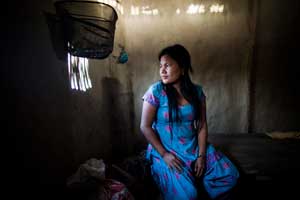 On 30 July we commemorated the World Day against Trafficking in Persons, first proclaimed by UNODC last year. According to the recent UNODC global report , no country is immune to this crime as there are “at least 152 countries of origin and 124 countries of destination affected by trafficking in persons, and over 510 trafficking flows crossing the world”.

Human trafficking entails recruiting, transporting and providing people for forced labour through the use of force, fraud or coercion. It may or may not include movement. “People may be considered trafficking victims regardless of whether they were born into a state of servitude, were exploited in their hometown, were transported to the exploitative situation, previously consented to work for a trafficker, or participated in a crime as a direct result of being subjected to trafficking” (Trafficking In Persons Report 2015, US Department of State). At the heart of this crime is the traffickers’ goal to exploit and enslave their victims, which is implemented through various practices.

In many cases it happens via criminal recruitment agencies that force migrants to incur substantial debts and send them to criminal employers who severely exploit them to reduce their production costs.

It most often occurs in construction, agriculture, fishery, clothing factories and domestic work, i.e. in those sectors of the economy where national labour legislation frameworks are non-existent or poorly enforced. Consequently, the most vulnerable to slavery conditions are those who, due to poverty, lack of other possibilities or indebtedness, accept irregular work and fall prey to traffickers who severely exploit them and make it impossible for them to leave. Some of the most vulnerable groups include migrants in irregular situations and asylum seekers, people in conflict and post-conflict situations and in refugee camps, and women and very young girls in clothing factories.

Human trafficking was recognised as a crime by the international community with the Protocol to Prevent, Suppress and Punish Trafficking in Persons, especially Women and Children, under the United Nations Convention against Transnational Organised Crime that came into force a decade ago. The Protocol obliges all country-signatories to criminalise all forms of trafficking. According to the recent UNODC report, currently “some 40 per cent of countries reported less than 10 convictions a year, while 15 per cent did not record a single conviction”. This demonstrates the level of impunity for traffickers worldwide.

We have recently heard and read terrible news about exploitation of fishers in South-East Asia where labour inspectors, even when they do exist, can barely reach distant-water fishing vessels and salaries are reduced to an extremely low level to enable employers to be competitive. The poor from rural areas are frequently lured to sea with deceptive promises and fraudulent employment contracts that result in slavery. This marks the beginning of slavery conditions for many migrant fishers as they don’t know what awaits them on many fishing boats. As it is difficult to identify a boat from where fish arrives, many companies don’t investigate labour conditions in their supply chains, while fishing boats may remain at sea for years and fishers may remain at the mercy of employers who often act as enforcers of forced labour.

Among the civil society organisations engaged in helping trafficking victims in Thailand, the Catholic Church organisation Stella Maris courageously reaches out to victims in the most difficult places to save them and appeal to justice. But no significant progress is possible without organised action by public authorities who have the mandate to persecute traffickers and introduce strict and systematic monitoring of fishing boats, as well as to develop real access to justice, including fair compensations for victims.

Another sector where abuse occurs is agriculture. In Europe irregular migrants and asylum seekers are often forced to work in inhumane working conditions and with extremely low wages to repay debts for their journey and send some support to families back home. The Italian newspaper Famiglia Cristiana reported the death of an asylum seeker while picking tomatoes in southern Italy. Mohamed, a 47-year-old Sudanese, worked without a legal contract for an agricultural company that has already been accused of trafficking workers and subject to legal proceedings since 2011. Like many other migrants, Mohamed used to work 12 hours a day (in temperatures up to 42°C) and was paid about €2 an hour.

“Presidio”, a local Caritas Italy project, provides water, medical and legal assistance to migrant workers and acknowledges that such inhumane working and living conditions have been a reality for a long time in agriculture, while the local authorities have paid little attention to combatting slavery and improving  migrants’ working conditions.

Once again, the Day against Trafficking gives us an opportunity to reflect on this and many other human tragedies created by the criminal activities of recruitment agencies and employers that are fuelled by high profits from a low-risk crime, and the indifference of public authorities.

Once the Palermo Protocol has been ratified, and the respective national laws adopted, what else can be done? Isn’t it high time to make the traffickers’ business more difficult by developing effective mechanisms, such as establishing the position of a National Rapporteur on Human Trafficking, enforcement of existing laws, and offering real access to justice, including compensation for exploited migrants regardless of their status? Shouldn’t migrants and asylum seekers be given more opportunities for safe and legal ways of moving, so that they don’t become vulnerable? Isn’t now the right time to be responsible and aware consumers and advocate for transparent supply chains free of slavery?