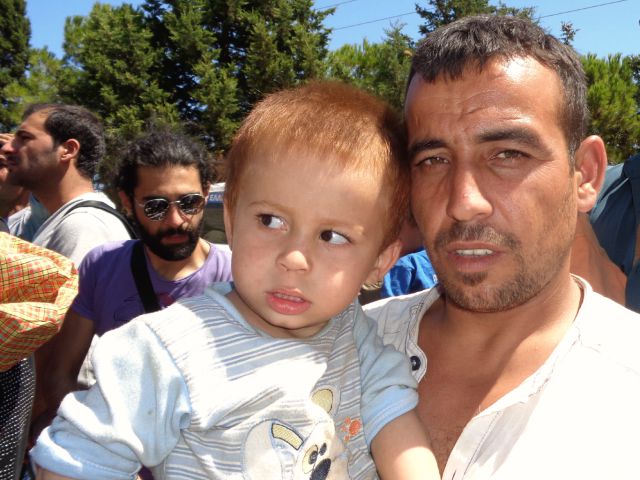 Greece is being overwhelmed by refugees and migrants, with a spike in the number of arriving this year. They’re mostly from Syria, Afghanistan, Pakistan and Iraq. They’re fleeing war and poverty.

The Greek Coast Guard is rescuing people from the sea as the refugees make their way from Turkey to the eastern Aegean islands of Lesbos, Chios, Agathonissi, Kos and Symi.

Caritas is providing aid to vulnerable children on the islands of Kos and Chios. Evelina Manola, a social worker from Caritas Greece, has been helping with relief efforts on Chios.

I came to Chios to work with the local team in distributing aid to the refugees here. Since our team is small, we are working with two other NGOs and with the local authorities.

We gave out 100 sleeping bags and 100 mats to children who are staying in or near the detention centre in Mersinidi.We’ll do that every 15 days for the next six months, thanks to support from the Caritas confederation.

About 8 out of 10 of the refugees are from Syria. Their stories are all pretty similar. They had a good life in Syria. But the war made it impossible to live there anymore. The bombs were too dangerous so they left.

They pay $1200 to the traffickers, seems prices are going down as the numbers go up. They arrive on small plastic dinghies from Turkey. The kind of thing you might buy for you holiday. They’re really unsafe. This week a Syrian man drowned. One of the refugees told me that he had to throw his suitcase overboard as there wasn’t any room. Most of the time, they break the boats so they won’t be sent back. I believe that’s what the traffickers tell them to do.

The conditions once they arrive here are bad, but not as bad as on some of the islands. There is a need for everything. It’s inhumane. If we can’t live like that, how can anyone live like that, sleeping outside, without clean water and adequate food.

What we’re doing is a help. It might just be a drop in the ocean, but it’s still a drop. The ocean is made up of lots of drops. Still, we need to be doing something bigger. We’re just able to help the children, but what about the women and men?

The refugees don’t stay long. As soon as they get their papers, they leave by ferry to Athens. They take the sleeping bags and mats with them for the rest of their journey. That’s all they want: to leave as fast as possible. For them Europe is a paradise. Their goal is to reach Germany and Sweden. 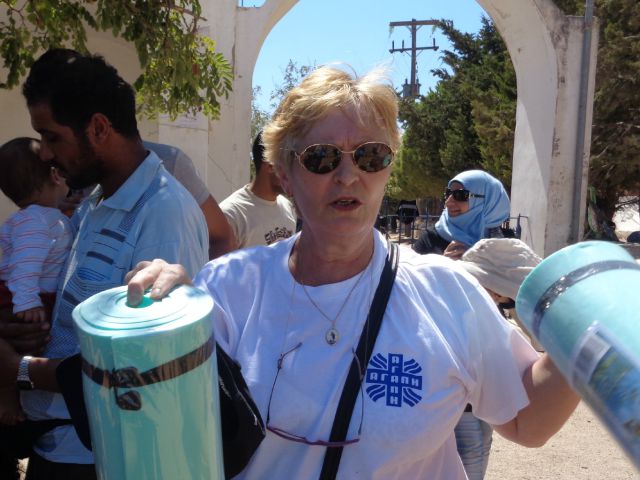 From the detention centre, they go to the port. There they have to wait, sleeping in a park because the ferries are full of tourists so it’s hard to get a ticket. I just visited the park. There’s over 100 people there.

It’s really hard for the people in the park, especially for the women. There’s only two small toilets. There isn’t enough clean water. They sleep out in the open. Some families have the mats that we gave them. Others are sleeping on cardboard boxes or just the floor, without anything. It’s really sad.

There’s some tension with the local people as there isn’t the capacity to help the refugees. But you don’t hear any racism. The refugees tell you that the Greek people greet them with smiles and offers of help.

I really hope that a safer way can be found for the migrants and refugees to arrive in Europe. Greece cannot be the only route as it doesn’t have the infrastructure. They need help, and we can’t give it to them on our own.