Caritas wants you to think about food: where it comes from, how to make sure everyone’s got enough and of the right quality, its ability to bring us together and its essential role on everyone’s lives.

Almost two years ago, Pope Francis helped us launch the “One Human Family, Food for All” campaign. The campaign crossed the globe in a wave of prayer, it encouraged many Caritas organisations to advocate to their governments for the right to food and it even prompted Caritas Panama to compose a song.

As part of the campaign, Caritas has been present at Expo 2015, the World’s Fair in Milan which has the theme “Feeding the Planet, Energy for Life.” 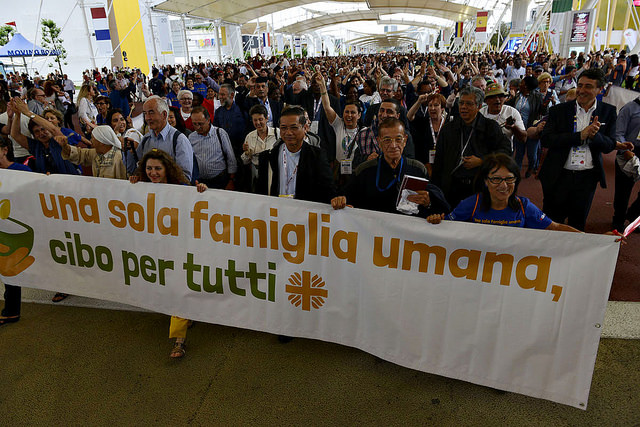 Caritas Day at Expo Milan 2015, where Caritas representatives from around the world gathered to celebrate the successes of the Food for All campaign. Photo by Simone Stefanelli for Caritas

As Paolo Beccegato from Caritas Italiana said at the presentation of the report, “Hunger doesn’t necessarily cause war, but poverty does.”

The report says: “A society which is less hungry is less vulnerable and less exposed to the risk of war. At the same time, war destroys resources and worsens quality of life and production systems.” Paolo gave the example of Syria, where food production was nearly halved in the first year (2011-2012) of war.

Don Antonio Sciortino, editor of the Italian weekly Famiglia Cristiana went on to speak about the unprecedented refugee crisis in Europe at the moment. He said that the media has an important role in pricking the world’s conscience regarding the suffering of people fleeing wars, dictatorships and poverty, and we as the audience have an important task of putting the information and images we see into context. He said those of us who saw the recent image of a small Syrian boy on a Turkish beach who had drowned while fleeing the war in his country with his family needed to ask ourselves: how did he end up dying like that?

On the second day of reflection on Caritas, food and war, my colleague Susanna Tkalec, Caritas Internationalis humanitarian director, gave a fascinating account of Caritas’ work across the world in emergencies and in situations of chronic need. In reference to the “Forgotten Conflicts” report she said, “Caritas is there – even in the forgotten conflicts.”

Caritas has a kiosk at EXPO where it raises awareness about hunger and poverty to masses of people who have come from around the world to visit the fair. 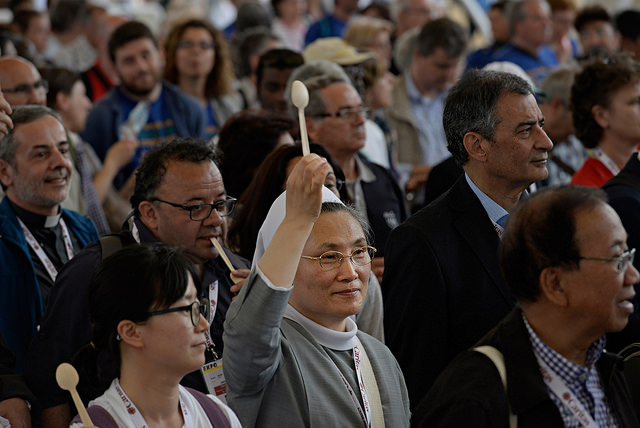 Caritas presence at Expo raises awareness that over 800 million people don’t have enough food in a world of plenty. Photo by Simone Stefanelli for Caritas

The issue of food and war is cleverly represented in Wolf Vostell’s art installation which sits in the centre of the kiosk and which has been loaned to Caritas for EXPO. The intriguing 1973 artwork depicts a battered Cadillac containing machine guns and surrounded by loaves of bread wrapped in newspaper. It’s considered a critique of the battle between consumerism and the sharing of resources.

Caritas debated long and hard about whether to have a presence at the six-month long EXPO. However, it was decided that we needed to be able to contribute to the food and hunger debate and to reach out to people to raise awareness about the need to share and be aware that over 800 million people don’t have enough food in a world of plenty.

Caritas Ambrosiana developed the Caritas kiosk and oversees our presence at EXPO. I asked our Ambrosiana colleague Sergio Malacrida who manages the kiosk, what sort of reactions it gets from visitors.

He told me about a group of eight Chinese children who came to look at the Caritas kiosk. They returned to Caritas the following day and each of them put 50 euro in the donation box. The father explained that they had been so struck by the exhibits that they fasted and saved the money they would have spent on food and donated it to Caritas.

“It’s to buy food for the poor people of the world,” explained one of the children.