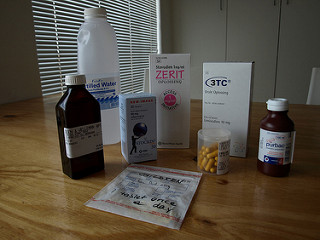 ARVs for children. Photo by Hough/Caritas

Last week marked the historic visit of Pope Francis to the USA.  During his first stop in Washington, DC at a White House welcoming ceremony, the Pope called on all American women and men of good will to “support the efforts of the international community to protect the vulnerable in our world and to stimulate integral and inclusive models of development, so that our brothers and sisters everywhere may know the blessings of peace and prosperity which God wills for all his children”.

On the next day, during his speech to the Members of the United States Congress, Pope Francis, urged that progress in science and technology be available to all. He identified business as a “noble vocation, directed to producing wealth and improving the world” but also warned, “… the proper application of technology and the harnessing of the spirit of enterprise are essential elements of an economy which seeks to be modern, inclusive and sustainable.”  He urged political leaders to serve prudently and responsibly, especially in policy setting related to business: “If politics must truly be at the service of the human person, it follows that it cannot be a slave to the economy and finance. Politics is, instead, an expression of our compelling need to live as one, in order to build the greatest common good …”.

These remarks by Pope Francis curiously coincided with the precipitous and remarkable decision by a USA-based pharmaceutical company to raise – by over 5,000% – the price of a 62-year-old medication used by persons living with HIV. Then, just as quickly, when faced by outrage from many sectors, the CEO of this company quickly announced that he would reverse this decision.

Even if this pharmaceutical company had not attempted to manipulate prices in such a dramatic manner recently, Pope Francis would have struck similar themes during his messages to the American people. He already was well aware of the disproportionate vulnerability and suffering of those who are poor because of their inability to obtain expert care and life-saving medications. I am fairly confident that he also is most sensitive to the continuing need for children living with HIV to benefit from better and more “child friendly” formulations and dosages, as well as diagnostic tools, to prolong and improve the quality of their lives.

Perhaps this very problem was foremost in his mind when, in a letter addressed to the 6000 participants at International AIDS Society’s Scientific Conference, held during July 2015, in Vancouver, British Columbia, the Pope expressed his “esteem for the work and the dedication required” of the scientists, clinicians, and members of civil society engaged in the global AIDS response.  He gave thanks for the lives saved by Highly Active Anti-Retroviral Treatment (HAART) and for the use of “treatment as prevention” and noted that such efforts “give witness to the possibilities for beneficial outcome when all sectors of society unite in common purpose”. Finally, he assured the participants of his prayers “that all advances in pharmacology, treatment, and research will be matched by a firm commitment to promote the integral development of each person as a beloved child of God.”

Pope Francis’ poignant words spoken  last week and in weeks past continue to shed light on the important work needed by all – governments, faith-based organizations, implementers, and civil society – to reach those most vulnerable to HIV – children.

Originally published on the blog of the Elizabeth Glaser Pediatric AIDS Foundation.