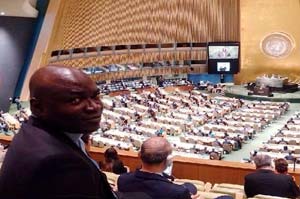 Sometimes it is not so much what Pope Francis says as what he is that touches you. You just know this is a man of God, the Vicar of Christ, the chief shepherd of the world faithful, and his sense and gift of presence is enough. He doesn’t say things, he shares his heart; he doesn’t speak, you become one with his thoughts, and for a moment every other thought of yours becomes subsumed in his and you touch his empathy.

I would say Pope Francis is God’s gift to the Church and especially to the world at this time. He is fearless as he defends the rights of his special constituency, the ‘discarded’, the ‘dregs’ of society, those remnants of a ‘culture of waste’.

From the UN church centre where I was watching Pope Francis’ address to world leaders, it was clear to me that the Pope believes in the UN. But he wants it to live up genuinely to its expectation as a darkness dispeller, because it has the potential of preventing the consequences of unbridled ambition which always has the poor as collateral damage. He wants it to be more inclusive of poorer and weaker nations especially in institutions with executive powers, such as Security Council or the International Financial Institutions, regarding which he highlights their ‘oppressive lending systems’ which have impoverished nations and peoples. He always wants everyone, even weak nations, to have a voice.

Unrestrained ambition always has consequences for the environment and humanity itself, for the natural world gets over-exploited and man who is part of nature ends up in a tension with the creatures with which he lives side by side.

Francis sees the 2030 development agenda as a sign of hope and prays also for the Paris climate conference in November. But he throws open a challenge to leaders of states and governments to go beyond making the UN a mere chatter house and to not fall into ‘a declarational nominalism’, where the fashion is to always make declarations ‘without teeth’. Rather he wants these men of power and influence to use their leverage on the institutions which they jointly agree to set up, and to overcome partisanship and manipulation and make them work. He wants the UN to bark and bite, by adopting an abiding sense of justice, which comes with a perpetual will to do good. If only world leaders always remembered that those who bear the consequences of their inaction or half-heartedness were real men and women who “live, struggle and suffer, and are often forced to live in great poverty, deprived of all rights…’ maybe it would draw them to more commitment. Otherwise the new agenda good as it is would be one of those nice declarations.

Speaking of the new agenda, Pope Francis wants education to be its foundation. The right of families to educate their children, supported by governments in two major areas: material and spiritual. Land, lodging and labour and spiritual freedom respectively make up the content.  Spiritual freedom here includes the freedom of religion as perhaps the most important component. The Holy Father has his own indicators for the success of the SDGs. They are: housing, decent work, food and water, religious freedom. If these are guaranteed to everyone, then the agenda is a success. Again we see a Pope who cares about the needs of those who are left behind.

I loved the way he drew attention to our finiteness. Humanity must remember it has limits. Reiterating the thoughts of his predecessor, he reminds the gathering of nations that man cannot have the final say because man is not final, s/he too is a living creature.  “Abuse begins when we no longer recognise an instance above ourselves, when we see nothing else but ourselves.” For a moment I thought about the impact of this statement, not only in opening up a transcendental relationship with God but a horizontal one with other human beings, but in how going ‘from ego-centricism to eco-centrism’ could turn things around for everyone. For indeed man is a creature with great possibilities but a very dangerous one. All the wars, all the conflicts, all the devastation are caused by man.

Pope Francis makes a salient point about war. It could be the single most devastating cause for reversed development; therefore the UN must continue to hone its skills in preventing the war. He insists that they owe a responsibility to the future, which demands that they be decisive “concerning the conflicts which continue to populate the number of the excluded.” He prays for a wisdom which rejects elitism and accepts transcendence, a wisdom which binds everyone in true fraternity with those who are always seen as a statistic, a wisdom which makes each one a servant of others and generates life changing ideas…

As the Pope rounded off his speech, we tried to get out on to the street to watch him drive by but the authorities stopped us. So we all rushed to the 8th floor of the building and had a good view below. Right across were snipers on the roof of the GA building using binoculars to watch us. Thank God we carried nothing that looked like a gun. And there he was, many feet below, waving in his tiny Fiat as it drove past. I clicked and got a photo of his hand protruding from the car window. My colleague Dadirai Chikwengo said ‘Imagine what would happen if we let go of some our opulence…’.

I am sure that in the same way the Pope brought impetus to climate change issues with Laudato Si, his address to the United Nations will inspire concrete commitment with the Sustainable Development Goals.