India’s economy is said to have doubled since 2008, but the growing disparity between the poor and the rich is still appalling. India is still a home to one third of the world’s poor people.

The Sustainable Development Goals (SDGs) that will be adopted at the UN General Assembly at the end of September will give hope for the poor and downtrodden in India and across the world. There is lots of scope for them if implemented effectively to make a difference to the lives of millions of people. 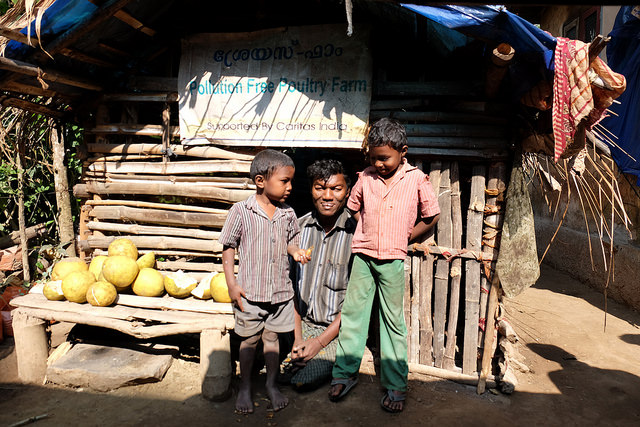 In villages in the area of Wayanad in the Indian state of Kerala, Caritas programmes linked impoverished families with government programmes, introduced organic farming methods, and helped them earn a living. Photo by Sheahen/Caritas

The biggest challenges for India in beating poverty and injustice are increased incidences of natural disasters (like, cyclones, floods, droughts, landslides and earthquakes), the population explosion, the rich and poor divide, environmental degradation, climate change, health problems and urbanisation.  Extreme poverty and irreparable damage to our precious natural resources have caused multiple problems for the poorest and most vulnerable people in our country.

Caritas India strongly believes that if the SDGs are implemented with the active involvement of humanitarian organisations like Caritas and peoples movements, the effect will be manifold. We believe in a bottom-up approach with community involvement in planning and implementing the SDGs. There are 165 national Caritas member organisations operating in 200 nations.  The grassroots’ reach of Caritas can bring a visible difference to the lives of the poor and marginalised. The outcome of Caritas’ contribution in relation to the SDGs needs to be documented over the next 15 years.

The recent encyclical by Pope Francis entitled Laudato Si’ reiterates the protection of the environment and the preservation of green spaces. This is not just an ecological issue alone, but a moral concern of deep spiritual value rooted in one’s own faith and commitment, irrespective of religious persuasion.

Issues around safe drinking water, care of biodiversity in the context of the loss of forests, the drastic change in the climatic conditions etc. call for an urgent need to work together to “care for our common home”, as the document challengingly puts it. “Laudato Si’ lays out a moral imperative to “care for our common home” and end the inequalities which are the driving force between interlinked problems like climate change and poverty.  The encyclical has aptly addressed this concern. If we take its message to heart, it can half the world’s problems, as the Executive Director of Caritas India Fr. Frederick D’ Souza has said.

The SDGs and the Pope’s encyclical Laudato Si’ are considered a great opportunity to influence people to act and support the causes Caritas organisations across the world stand for.  Caritas India, with more than 200 (including 171 Diocesan social service societies) operating partners and a strong grassroots base in every nook and cranny of India, can contribute a lot to the SDGs in the coming years. The support and encouragement from various organisations and government agencies will add to our strengths for achieving better results and reach. Community involvement, technical expertise in various sectors like livelihood, disaster response, natural resources management and partnerships are our strengths.

The effort made by the UN in elevating Millennium Development Goal (MDG) to Sustainable Development Goals is well appreciated considering their importance in the context of extreme poverty, inequality, environmental degradation, climate change etc. The word “SUSTAINABLE” gives confidence as the measures taken up by governments will be long-term and far-reaching.