On the road to Germany 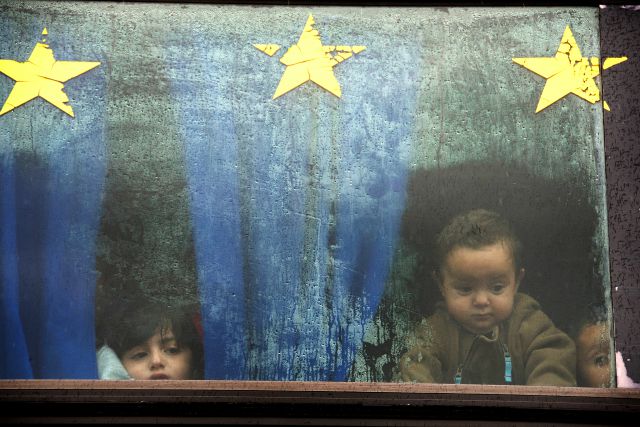 Refugees arrive by double-decker bus in to the Serbian boarder town of Kanjiza where they will wait at the Vasariste refugee aid point before continuing on to Hungary. Photos by Kira Horvath for Catholic Relief Services

“I walked so many roads”, he says. “I crossed so many rivers. I went over so many hills and valleys. I lost my home, my belongings, literally everything.” Abdalkarim Zahra is only 26, yet he says he is “totally finished.”

It’s been many weeks since he fled his home in Syria. His journey has taken him to Turkey, Greece, Macedonia and Serbia. People smugglers have taken all his money. He has been pushed into an overcrowded boat to reach Greece. He has worn the same clothes for weeks. He has suffered hunger and thirst. He has been kicked by border police. “Can I still be called a human?” he said.

I meet Abdalkarim Zahra in a refugee aid camp in Kanjiža, a Serbian town 3.5 kilometers away from the Hungarian border. About 2000 to 3000 refugees come here every day on their way to Hungary. They then head mostly to Germany.

Caritas is providing emergency relief there, in two other refugee aid camps in the south of the country in Preshovo on the Macedonian border and in the capital Belgrade. Just like tens of thousands before him (and most probably hundreds of thousands after him), Abdalkarim Zahra has stayed in them all.

In these camps, Caritas Serbia – supported by Caritas organisations from the USA (CRS), Germany and other countries – distributes drinking water and juice to the refugees, provides medical help and legal support. In Kanjiža, Caritas is even providing a temporary facility for refugees and migrants that has bathrooms, showers and beds.

“In these aid camps for the first time after so many exhausting weeks, I felt I was treated as a human.” said Abdalkarim Zahra. 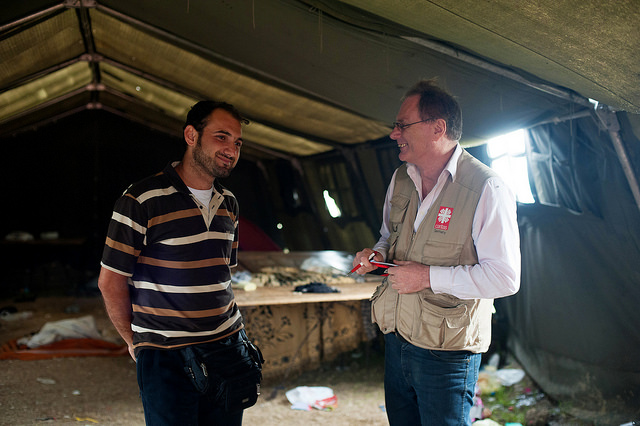 He left Syria because he no longer wanted to join the national army which recruited him. “I deserted. I ‘m a sensitive man. I could never hurt, let alone kill, someone. So at first, without telling anyone in order not to reveal myself, I went to Turkey.”

That was the first of many borders he had to cross – with large intervals. It took him two years until he finally reached Greece. “I could not afford to go to Europe initially. I came to Turkey with nothing but the clothes I was wearing. I had to work.”

He found a job in a shoe factory and saved money for two years, working for twelve hours a day, absolutely determined to go to Europe, preferably Germany where “everybody told me life would be better.”

After two years living like a recluse – leading a life limited to working, sleeping and eating – he joined a refugee trek. At Turkey’s southeastern borders, people smugglers – for $1500 per passenger – pushed 34 of them on a small rubber boat which was only 6m long.

“Next to us was another boat of the same size and they overloaded it with 60 people. I saw how they lost some boys in the sea. It was 4.00 am and the water was cold. But thank God these boys survived and could make it to the boat again,” he said.

“I had to weep when I saw a young three-year-old girl who was in tears because she lost her puppet on the way. This puppet was the only thing she could save from her home in Syria,” he said. “The days before how she was clinging to it as a sort of last memory of what she and her parents had lost. Losing the puppet for her must have been like a symbol indicating: Now it is all over.”

Abdalkarim Zahra has not heard of Caritas before. “Unfortunately,” he says as I tell him that Caritas is helping refugees in nearly every country, even in Syria itself. “Also in Germany?” he asks. “Yes” I say. And now this man, who had described himself as “finished” before, suddenly starts to smile.“Thank you”, he said. “It’s good to know that something like this exists.”

A bus turns up at the refugee aid camp in Kanjiža. It takes new refugees to the Hungarian border. It’s a departure into unknown for Abdalkarim Zahra. He is aware of the fence which Hungary had erected at the Serbian border and of some reported cases of mistreatment towards refugees. He seems confident to reach Germany soon. At least there is hope in his eyes.