Refugees get aid as they pass through Serbia 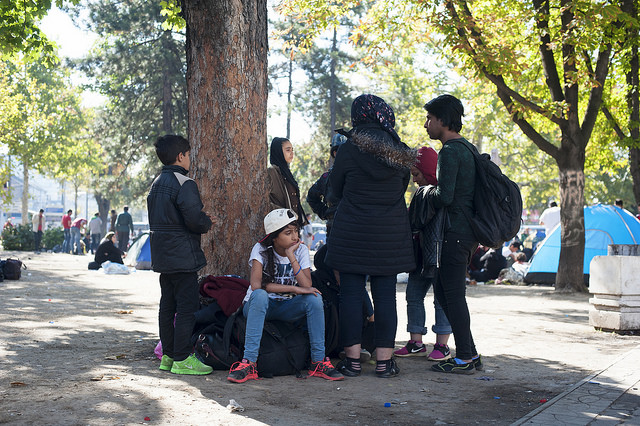 Refugees in Serbia wait in a park adjacent to the Belgrade main bus station hoping to board buses for the Hungary boarder. Photos by Kira Horvath for Catholic Relief Services

In the park near the railway station in Belgrade, the scene is all too familiar.

A little girl is sleeping on a dirty mattress next to her mother and some other women. There are many tents, some people are sitting together in groups, others are queuing for the few mobile toilets available. There is a lot of garbage around.

A new day is starting in the lives of these refugees and migrants. Another day away from their homes, filled with uncertainty. They look tired but they gather their strength to get back on their feet. Men are packing their tents and leaving. Their journey is far from being over.

They’re part of the surge of refugees and economic migrants coming to the European Union through Turkey, Greece, Macedonia and Serbia. These countries, all with their own economic problems, are being stretched to breaking point.

Behind the Belgrade station, there’s a makeshift distribution centre, a former open space for artists converted to support refugees. Many volunteers work here and there has been a remarkable expression of solidarity by the local population.

Here refugees receive clothes, relief items and other basic services. Caritas Valjevo (through Catholic Relief Services – CRS) is about to start a distribution of hygiene packs, alongside with a food distribution. People gather quickly, every form of support is welcomed and needed.

Workers and volunteers give more than material support: they share a smile, a word of comfort, a show of respect for the dignity of the refugees. 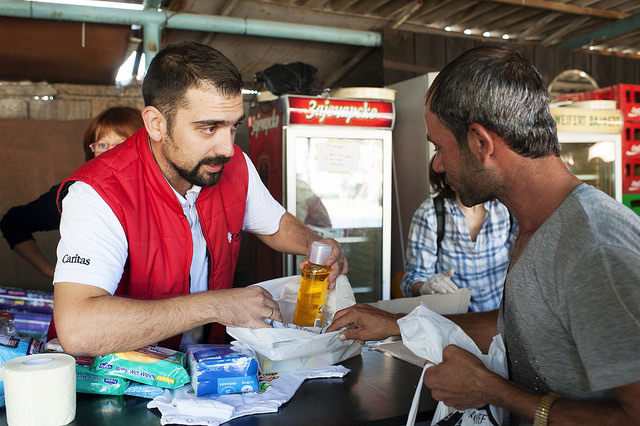 The next day and it keeps raining. I hear that 5,000 refugees have just crossed the border in Preshevo and that 23,000 more are expected in the coming days. The Serbian government, through the Commissariat for Refugees, has set up reception centres in Preshevo and Kanjiza. But it’s not enough to meet the needs.

Back in the park with Ana, communications officer from Caritas Serbia. The picture is the same, but how much longer can people gather here. Days are becoming colder, people don’t know where to sleep.

A woman from Iraq shows me her daughter wrapped in a blanket. She doesn’t speak English but she makes me understand that she is sick. People desperately need shelter. When it rains they don’t know where to go and they wait long hours in wet clothes.

The Commissariat for Refugees has sent two buses to transfer refugees to a reception centre in another part of town. The buses however remain empty. People need to stay near the station, they need to continue their journey and they are scared to separate from their groups.

Ahmed is an economics student from Syria. He escaped with his sister. She left her two children behind with their father. He says “thank you” with a smile. He says that he has felt welcomed in Serbia.

He asks what time it is, he is waiting for the bus for Hungary. “I’m scared of what will happen in Hungary. I know it is difficult. But I need to continue my journey to Germany,” he said.

More and more cases of people coming back wounded from their attempts to cross the barbed wire wall on the border with Hungary. The definite closure of the border between Serbia and Hungary on 15 September means that the number of refugees in Serbia may increase and that their permanence there may become longer. I also hear of people with bruises because they have been hit by the police crossing the borders .

This situation is fluid and complex. It is good to see a general willingness to help. Maybe the presence of refugees in Belgrade is a scene still not too distant in people’s memories.

It’s still difficult to know exactly what to do. Caritas needs to work as a network. We need to think and act as one and to use all the resources we have at the local, national and international level. I ask Ana what she thinks Caritas should do.

“When we approach refugees, many of them know Caritas. This is a good sign, considering that many of them come from countries where the Catholic community is a minority. This means that they have been helped by Caritas along the way,” she said.

“This is our strength, we are present in many countries and we can walk hand in hand with refugees along their journey”.