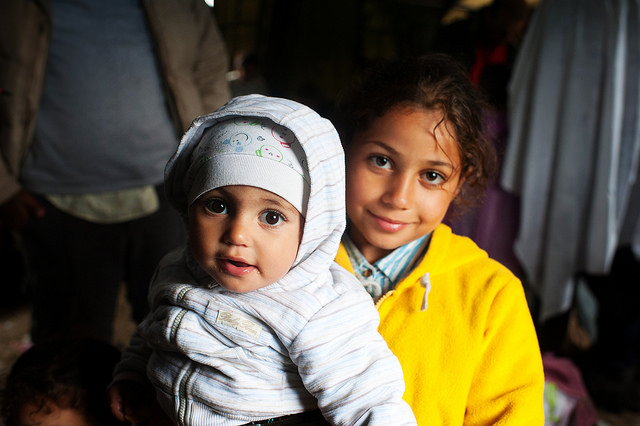 Omama, 8 years old, feels homesick. Her father Khaled Basheer says to her, “How can you feel homesick when there is no home any longer?” His words are somehow well intended but the truth does little to console his daughter.

The Basheers are a family of six from Syria. Their flat was completely destroyed by a bomb. The family survived. “But can you really say we were lucky,” said Khaled. “We had to live in a tent in the suburbs of our home-town Aleppo from then on. For more than one year. And we were frightened every single minute, every day and every night.”

The Basheers feared the criminal gangs roaming through the suburbs and villages. They were frightened of more bomb attacks, being exposed to the sounds of explosions and gunfire nearly every day. “We were also very frightened of an attack by the IS. We heard such horrible stories how cruelly they kill innocent people and rape women and young girls,” he said.

Khaled and his wife Jayal have three daughters and one son. I meet them all – two weeks after they escaped from Syria – in a refugee camp in northern Serbia, in the refugee camp of Vasariste in Kanjiza, close to the Hungarian border. Jayal introduces her children to me: “This is our son Mohamed, nine years old. Omama is eight, Ronya is two and a half and the baby in my arms is just six months old. Her name is Joud.”

Omama wants to talk to me. “Doesn’t her name sound a bit like the name of the US President,” said Jayal Basheer. Omama is curious as she heard that I come from Germany. “This is the place we want to go,” she said. “Daddy promised we will get a nice home there. And he said there will be good people there.”

Khaled said, “That’s how I try to console her. I hope so dearly it will work and I will immediately get some work in Germany. I’m used to working a lot. I’m a construction-site worker. And I urgently need money. You know, I borrowed all the money for our flight from Syria and I have to pay it back. And we are already running short of money because the people smugglers nearly took it all.”

The crossing of the sea from Turkey lasted only about 40 minutes, yet it cost the Basheers $5000. Khaled and his daughter Ronya were not even on the boat. It was so overcrowded that there was no space for them.

Khaled is a tall, sturdy and broad-shouldered man. And he is strong and tough. Otherwise he could not have managed what I first find hard to believe when he tells me: “I was swimming alongside the boat, with Ronya wrapping her arms around me and clinging her head to my neck. It was a rubber boat and very slow. So I could keep pace. If that hadn’t worked I was expecting Jayal and the other children to wait for us at the shore in Greece.”

Omama was, as she tells me, scared all the time, worried about her father and worried their boat might sink. “My Daddy is very strong”, she says proudly. “When we went from Syria to Turkey, we walked over hills and mountains. And most of the time he was carrying Joud and Ronya in a big backpack. And sometimes he was also carrying me.”

Her father said, “But now I am really very exhausted. Walking and swimming and riding in such life-threatening conditions took nearly all my strength. It was so hard and tough. Believe me, you cannot imagine.” 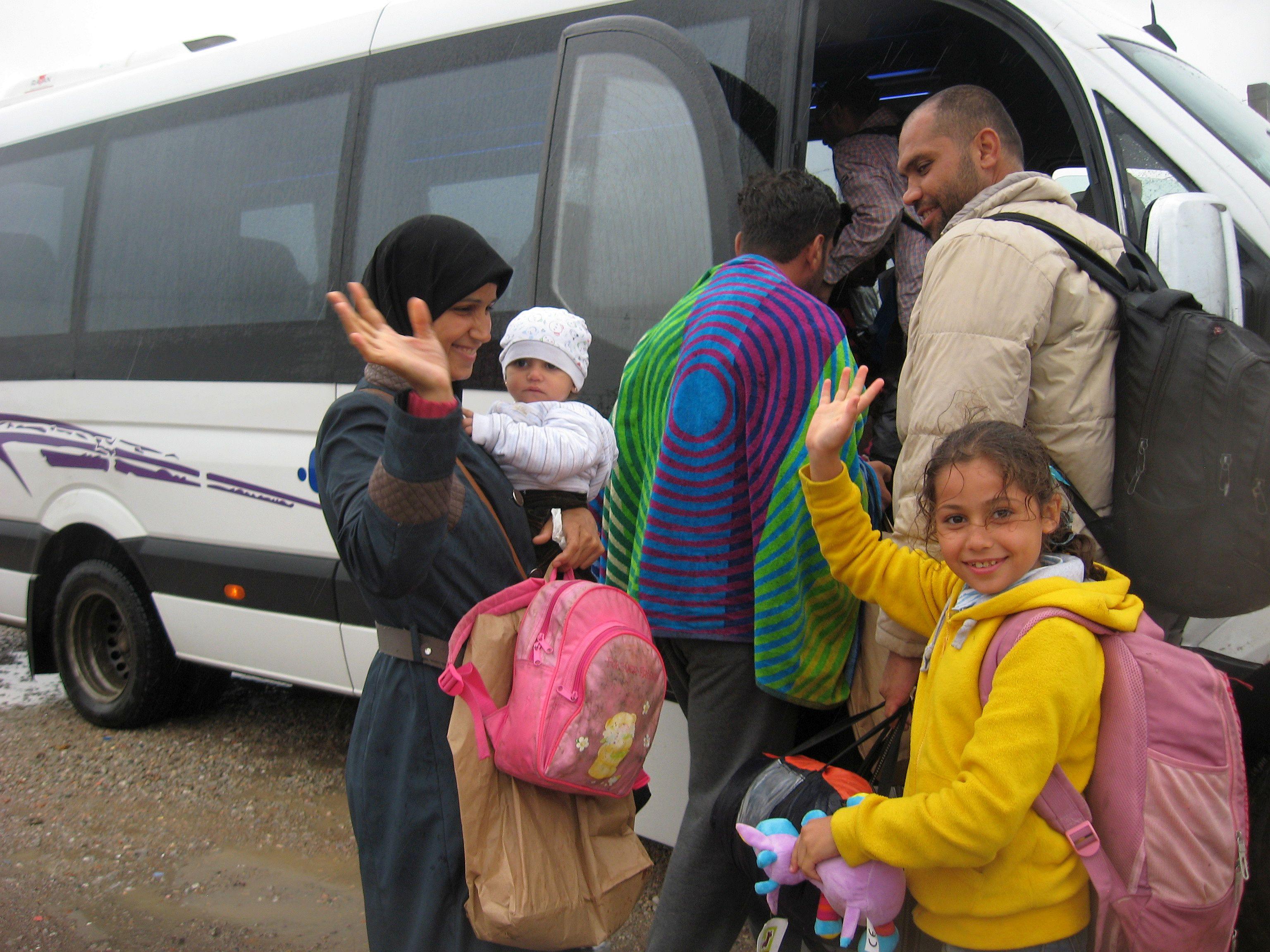 Omama (in yellow) waves goodbye as her family board a bus for Hungary. Photo by Stephan Teplan for Caritas Germany

The Basheers take some juice that is being distributed in the tent. “We are running short of money”, said Khaled. “So we’re so grateful that humanitarian organisations like Caritas provide us refugees here with what we need most.”

There are three camps for refugees in Serbia, one in Preshovo at the Macedonian border, one in the capital of Belgrade and one in Kanjiza at the Hungarian border. Caritas Serbia – supported by Caritas organisations from the USA (CRS), Germany and other countries – is distributing drinking water and juice to the refugees there, provides medical help and legal support.

“There are good people here,”said Omama. “As Daddy promised. He always said in Europe there will be good people and he will get a good job and a nice new home for us.”

The Basheers pack their bags. They are about to leave as a bus is approaching which will take them to the Hungarian border. I accompany them to the bus. Omama gets that wrong. “Are you going to ride with us?”, she asks. I tell her that I will also go to Germany in a couple of days but unfortunately not via Hungary and not with them on their bus.

“But maybe we will meet again in Germany. Who knows?” I say.

“We will invite you to our new home”, the girl replies. She is waving me goodbye as she is boarding the bus, laughing and shouting out loudly through the noise of the running engine and the lively chatting of the people around: “See you in Germany.”