To go or not to go: a Syrian asks the question

Thousands of people are arriving every day on Lesbos. They’re part of a wave of at least 430,000 refugees and migrants to have crossed the Mediterranean to Europe in makeshift boats operated by people smugglers. They register here before taking a ferry to Athens and then elsewhere in Europe. They need shelter, food, information and health assistance. Caritas Hellas (Greece) is providing mats, sleeping bags and other aid on Lesbos, Kos, Chios, in Athens and on the border with the FYR of Macedonia.

Shiar, 31, is a Syrian refugee travelling to Europe with his family. He spoke to Caritas in Kara Tepe transit camp on Lesbos. He began by apologising for not having a chair but only cardboard to sit on. 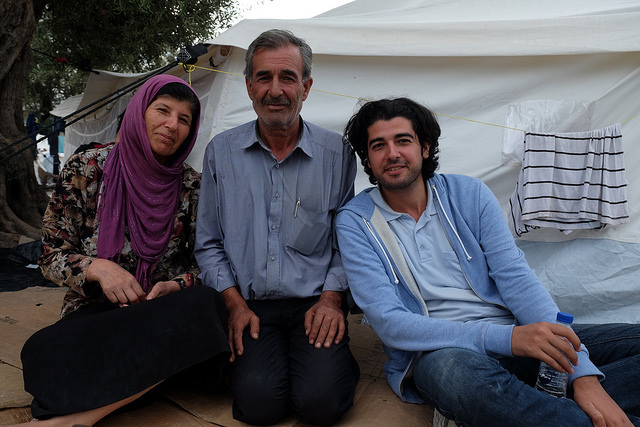 Shiar with his mum and dad in Kara Tepe transit camp on Lesbos. Credit: Patrick Nicholson/Caritas

I studied English Literature at the University of Aleppo, graduating in 2010. I’d started to teach before that in both public and private schools. I was preparing to do a Masters. Looking back, I was lucky to graduate when I did. Any later and it would have been too late.

The last time I was in Aleppo was in 2012. Military conscription in Syria is mandatory. When the war started in Daraa almost 5 years ago, I decided to get away for awhile. I’m a Kurd. The military leadership don’t trust the Kurds, so we’re always on the frontline. And if I was captured by ISIS I would be immediately executed. Either way my chances of survival were slim.

I went to Turkey to wait and see what would happen at home. The conflict got worse so I stayed there. I worked as an English language teacher in Istanbul. I had friends from Australia and England. They told me about Caritas. They asked if I wanted to donate something for the refugees from Syria. So we brought Caritas Turkey some clothes and toys.

My family stayed in Aleppo. Last year our street in the district of Ashrafia became a frontline between the government and the Free Syrian Army. My mum and dad could see the missiles flying past. With my two younger sisters, my parents left 9 months ago and came to live with me in Turkey.

The situation in Turkey wasn’t that good. I have asthma and my father has diabetes. But we couldn’t get the right documents. We had a “foreigner identification”, which meant we couldn’t get health coverage. My sisters couldn’t continue their education.

When we looked at what was happening in Syria, we realised it was impossible to go back. We saw our district being destroyed on TV. It was really shocking. We realised we couldn’t stay in Turkey with nothing. So we decided to go somewhere with better rights.

We applied with the UNHCR, but they said that they weren’t registering anymore refugees. My parents wanted a future for their children. They said let’s go by boat to Greece. I was frightened as I’d seen the people getting drowned on TV, but they insisted. I went with them to look after them. 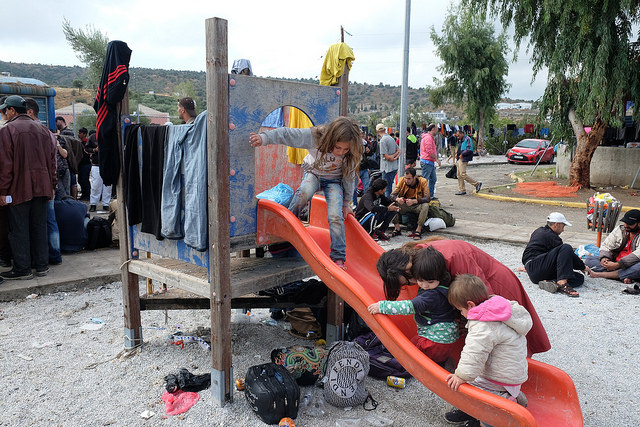 Kara Tepe transit camp on Lesbos where Syrians and other refugees register before moving by ferry on to Athens and beyond. Credit: Patrick Nicholson/Caritas

My father met some smugglers through some people he knew. The traffickers were young men in their 30’s and 40’s. Some were armed with pistols and others with rifles. They were mean and insane.

We travelled 8 hours on a coach with about 45 other people to Truva (Troy) on the coast. There were Syrians, Iraqis, Bengalis and Pakistanis. It costs about $1000 – $1200 per person for the whole trip, depending on your ability to bargain.

We stayed overnight, then walked about 90 minutes to the coast and sailed in the morning. There were about 52 of us on a boat about 8 metres long and 3 metres wide. The traffickers stayed on the shore. They’d trained one of the passengers to drive the boat and allowed them to travel for free.

These boats were really rickety. On board, I couldn’t believe I had taken the risk, but my parents had insisted. The engine stopped three or four times. We didn’t have GPS or a phone to call for help. The women and children were crying. I felt that we were going to die.

We tried to calm the children down. The guy driving managed to fix the engine. We were extremely lucky. When we reached the Greek shore, we were just so happy. It was like a new life had begun. My first step on Europe felt like hope.

Then we walked. We were very thirsty. The smugglers hadn’t let us take any water on board. I said to them why not just bring less people so we had room for water, but they were too greedy. So after being in the boat under the hot sun for hours, we needed to find water.

We tried to sort out some transport to the police station so that we could register. It didn’t work out so we walked until the evening. It took about 8 hours until we reached a transit camp. The other refugees were friendly and took us to a tent.

The poor conditions don’t bother me. I wasn’t expecting luxury, or a bed or food. When it rains it’s cold, but you survive. It’s a refugee camp you know – a camp for people who are coming and going. 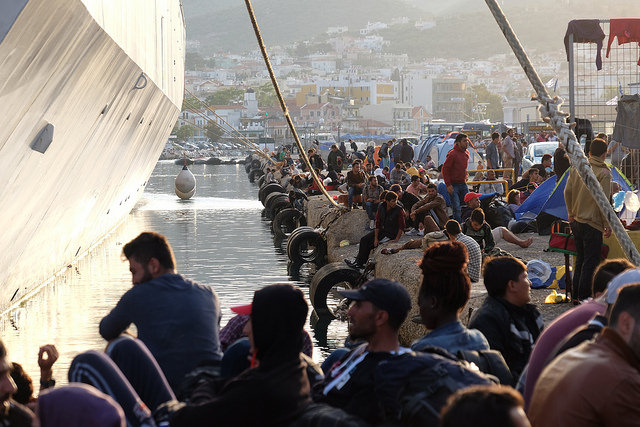 Already this year, nearly 200,000 have passed through the Greek island of Lesbos. Credit: Patrick Nicholson/Caritas

We have tickets for the ferry to Athens, but because of overcrowding we can’t sail for 2 days. We’ll go to Athens, then the border with Macedonia (FYROM). Some aim to reach Sweden and others Germany. It doesn’t matter to them, it’s all the same.

If I was German I might be upset to have to take all these people just because you’re the number one economy. Other countries should share the burden. The refugee crisis is only going to get worse. It’s too late for Europe to stop this. There are 2 million Syrians in Turkey, over a million in Lebanon and over a million in Jordan – they’re unstoppable.

You have to end the crisis in Syria, but the opportunity to do that has been missed. Now it’s become very complicated. There are too many factions. For minorities like the Kurds, dicatorship would be better than an Islamist run “democracy”. Stopping the flow of arms would be one way to halt the suffering.

We lived in a lovely village in Aleppo. When the situation gets better, I’d like to return. I want to study neurolinguistics so I can help the next generation to acquire foreign languages more easily and quicker.

Thinking back to my studies, Ben Jonson’s Volpone comes to mind. Also Shakespeare’s plays, Macbeth and Anthony and Cleopatra. “To be or not to be” is probably the most apt quotation, but I prefer to think of Sonnet 18: “Rough winds do shake the darling buds of May, and summer’s lease hath all too short a date.”