Which way is Sweden? The refugee crisis on Lesbos 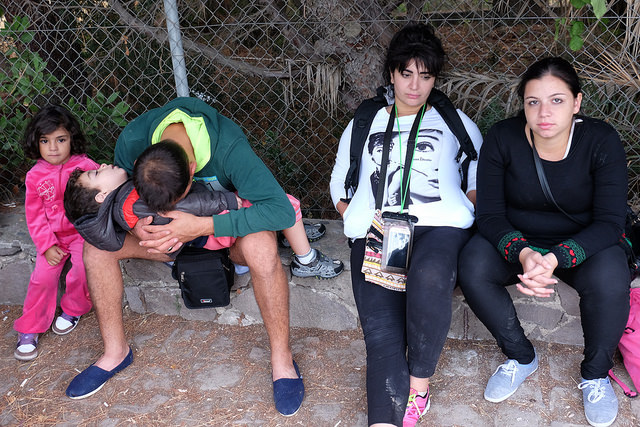 Sara in the white top, 27, on arrival in Lesbos by smuggler’s boat. She is Syrian from Aleppo. She travelled with her husband, daughter, 4, son, 3, and with her friend Nermin, 20, who is 8 months pregnant. Credit: Patrick Nicholson/Caritas

“When we landed, we were crying with happiness,” said Sara, “At last we felt safe.”

The 27 year old Syrian was enjoying her first dawn on European soil. Less than an hour earlier, she’d been on a makeshift boat floating across the pitch black Mediterranean Sea with 30 other Syrians all squeezed in on top of each other.

Now she is on the northern shore of the Greek island of Lesbos, first stop on her journey to a new life in Europe. “The first thing we did was check if all the children were ok,” she said. She is travelling with husband and her 4 year old daughter and her 3 year old son.

The remains of her boat and five or six others that came over on the same morning are scattered on the beach. The refugees have put their life jackets into tidy piles or into bins. Among the debris are children’s inflatable rings, a pathetic gesture to the danger of the journey.

“We have less chance of dying at sea than of dying in Syria, that’s why we can put our children into the boats,” she said.

Her husband lost his family in the fighting that has engulfed Syria for 5 years and their family home was destroyed in 2012. Before the war began, the family was comfortable. Sara was a graphic designer and her husband a mechanic.

“This journey is hard but it’s our only option for our children’s future. It’s better to travel facing these dangers than to face ISIS. They’re not Islam. Islam is a religion of peace.” 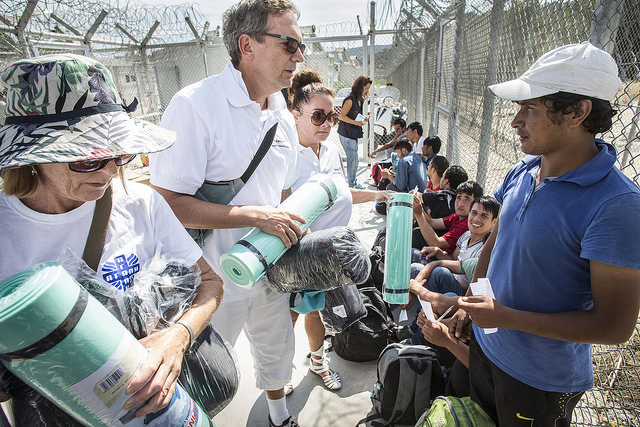 Caritas has distributed mats and sleeping bags to refugees and migrants on the Greek island of Lesbos. Credit: Arie Kievit/Cordaid

Sara and her husband had been “too scared to sleep for three days”. Exhausted, they rest on the side of the road. They’re bewildered. Many of the refugees have no idea of where they are. They just know they want to go to Germany or Sweden. “Which is better?” said Sara.

There are not just Syrians arriving in Lesbos. There are refugees and migrants from Iraq, Afghanistan, Pakistan and sub-Saharan Africa.

“There is no security in Afghanistan. I worked in a bank. I have finished a degree in business management. But after the last election, I lost my job,” said Jamshid, 24 years old, from Afghanistan.

“We’re trying to get to Germany. If we’re stopped by closed borders then we’ll wait. We want a life. Europe is our future. We can do something with our life there.”

The boat trip was horrendous, but so was the border crossing from Iran to Turkey. “It took 18 hours by foot. It was very dangerous and difficult to cross the mountains. I don’t know if they were sleeping or dead, but I saw bodies on the side of the road,” he said.

Already this year, nearly 200,000 have passed through the Greek island of Lesbos, at the epicentre of the ongoing refugee and migrant crisis due to its close proximity to Turkey.

“You can hear music from the Turkish shore,” said Leonard Meachim, a 59 year old primary school teacher, who moved from Liverpool to Lesbos 30 years ago where he lives with his Greek wife.

“The situation really started to explode this spring. You would see groups of 200-300 a day. And then in the summer the numbers became huge, in the thousands,” he said. “You couldn’t believe you were in Greece. It was like being at a football stadium, but every face was Syrian.”

The police couldn’t process the refugees fast enough. There was not enough space on the ferries to leave for Athens. The refugees and migrants camped out on the side of the road, in the port and in newly opened transit camps where the facilities were “non-existent”. 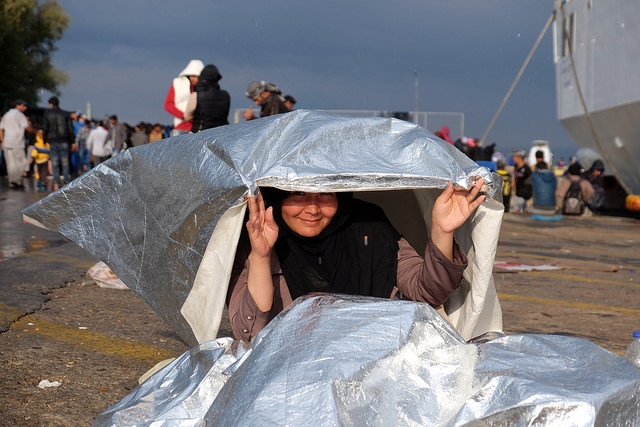 Bad weather threatens to make the lives of refugees and migrants even more uncomfortable as they pass through Lesbos. Credit: Patrick Nicholson/Caritas

“You’re not legally allowed to give lifts,” he said. “That felt really bad, especially when you see young children and the elderly. I gave help to an Afghan man. He said ‘money, money’, but I didn’t have any to give him. Then he started to thank me and I realised he’d been offering me money.”

When Caritas Greece (known nationally as Caritas Hellas) came to the local parish on Lesbos to see about organising help, Leonard volunteered. “The work of Caritas helping the refugees and migrants has brought people into the parish. We’re so thankful to have had this opportunity,” he said.

Volunteers have given out sleeping bags and mats to the refugees and migrants. “You can’t solve the problem, but you can make a difference to some people’s lives just by giving them things they need,” said Leonard.

The refugees just stop for as long as it takes to get on a ferry to Athens and then onwards. They need shelter, food, clean water and a place to wash and go to the toilet. The weather has been warm over August. Now the cold autumn is approaching, shelter will be a priority.

More still needs to be done but conditions have improved. Registrations are quicker. The Greek authorities have put on an extra ferry. Aid agencies have been working hard to improve transportation from the beaches to the transit centres. There have been improvements in the shelter, water and sanitation in the camps.

“Thanks to the Caritas community for coming here and providing this help to the local parish and to the refugees,” said Archbishop Nikolaos Printesis, the Apostolic Administrator.“Our parishioners have been moved by what they have seen to act. We have seen the face of Jesus in the face of every refugee.”