Growing numbers of refugees in Serbia, Croatia and Slovenia 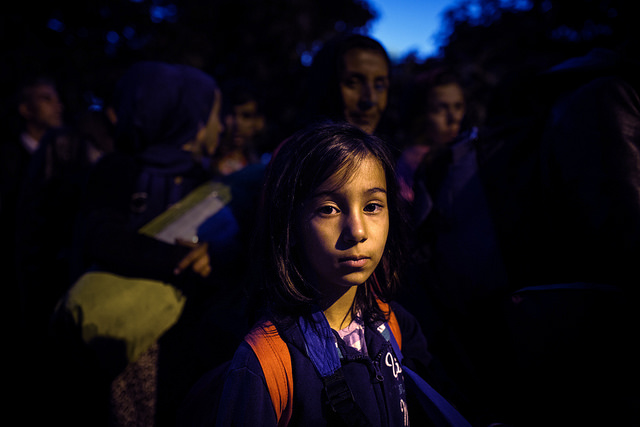 Ilahi, 7, from Afghanistan, prepares to cross the Serbia/Croatia border with her family, at Berkasovo, Serbia. Photo by Andrew McConnell for Catholic Relief Services

The registration centre in Presevo for refugees crossing from the FYR of Macedonia to Serbia recorded its highest number Saturday with 7770 new arrivals. More than 9000 entered Serbia Saturday in total. Nearly half were children.

They are part of the worst refugee crisis in Europe since the second world war. More than 670,000 people have crossed into Europe this year, with 56,000 arriving in Greece in just six days last week.

They are fleeing conflict in Syria, Iraq and Afghanistan. They make their way by boat from Turkey, to Greece, the FYR of Macedonia, Serbia, Croatia, Slovenia and then on to Austria, Germany and other European countries.

Caritas distributed 1000 food packs in Presevo over the weekend, with 300 hygiene packs for women and 120 for babies.

Across the country, large groups of refugees are stuck at the illegal Berkasovo crossing to Croatia. It’s a muddy path in a cornfield, so this makes it harder to organise any assistance there. Conditions are dire.

In Berkasovo, Caritas volunteers and staff members have been active in packing and preparing food and hygiene. This weekend they were able to distribute around 1000 food packs, around 140 hygiene packs for women and 150 hygiene packs for children.

Caritas staff members are also helped by a group of 30 young volunteers from Caritas Czech, who are staying at a Greek Catholic parish nearby. These volunteers cleaned the site of Berkasovo border crossing, which is filled with garbage. 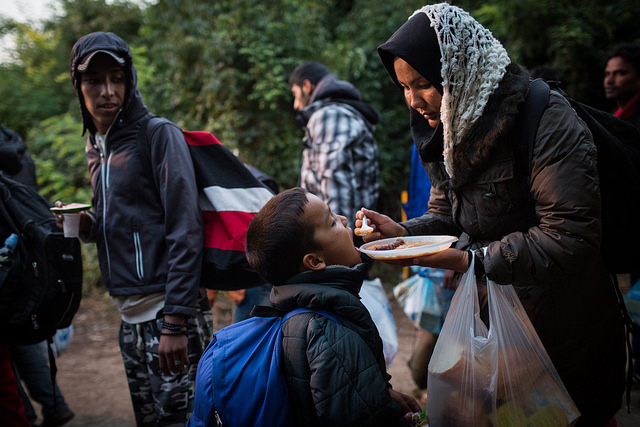 Caritas were able to distribute around 1000 food packs to refugees this weeken in Berkasovo. Photo by Andrew McConnell for Catholic Relief Services

Magdalena Pavlovic, Caritas coordinator at the border with Croatia, said: “On people’s faces we could see tiredness and exhaustion. There were many children among them and they had to walk for 4 km to get to the border crossing with Croatia.

“There were different humanitarian organisations trying to ease the pain of the refugees and we were one of them. Caritas distributed the aid in the afternoon and evening, while others were there only during the morning. Volunteers from Caritas Czech were there to drive women and children with their van, so they didn’t have to walk long to get to the border crossing.”

So far Caritas in Serbia has assisted over 21,000 people with food packs, 5600 women with hygiene packs and distributed over 1800 baby hygiene packs. 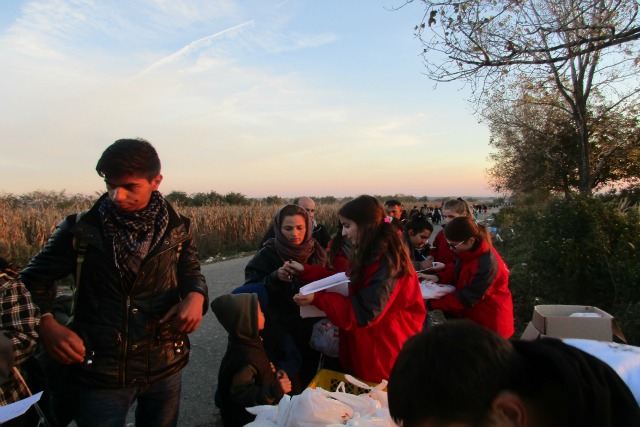 In Croatia, Caritas volunteers prepared 10,000 lunchboxes for refugees in Opatovac across the border. Caritas Croatia is also delivering bunk beds for a new camp and will provide winter tents.

Meanwhile, Jana Lampe of Caritas Slovenia said that there are more refugees and migrants then the registration centres can cope with. She said, “In one week, 80,000 refugees and migrants arrived in Slovenia. Just during the last weekend, 20,000 came. And right now in front of the border, there are 15,000 new refugees. It is really terrible situation now.”

Around 250 Caritas Solvenia have been delivering food fish cans, milk and apples, as well as blankets. “There is still big need of food and warm blankets and clothes as many people sleep over the night outside as there is not enough place in the centres,” said Jana Lampe.