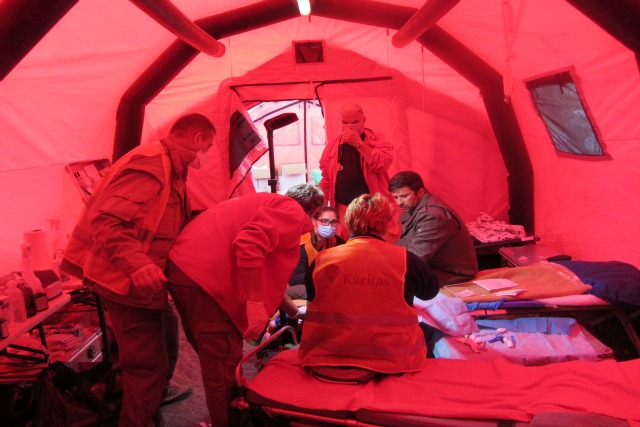 Caritas has been working in Slovenia with the Red Cross, civil protection groups and the government to provide food and healthcare in each of the transit camps to families of Syrians, Afghans and others.

After Hungary closed its borders, the refugees are now travelling through Slovenia onwards to Austria. They’ve been on arduous and perilous journeys through Turkey, Greece, Macedonia, Serbia and Croatia.

“I can’t imagine what hardships they’ve been through – the flight from war and now this. It was heartbreaking, to see people who have travelled so far have to queue up in the mud for food.”

Jana Lampe of Caritas Slovenia was handing out food yesterday in the newly opened registration centre in Dobova, on the border with Croatia.

“The camp has the capacity for 2100 people. There were 4198 refugees and migrants yesterday, so it’s really crazy. 20,000 people arrived over the weekend. Things have become more organised since then, but some people are still sleeping outside.

“There are lots of families, lots of pregnant women, lots of children. The refugees are much poorer in this latest wave. I saw lots of tired and really hungry people. Many are ill. I saw many panic attacks.

“Fortunately, a team of Caritas Hungary doctors has come to provide healthcare. Slovenia would be really in trouble without them. They’re working out of three tents, providing basic care. They will stay at least two weeks more.

“There were crowds in the camp yesterday. Many people just wanted food and water. They were just saying help me. We gave them what they needed. They also receive clothes. We try to help everyone. There is a lack of shoes though. The Syrian families especially are so grateful.

“I saw two women queuing for food. They had tears in their eyes. I can’t imagine what hardships they’ve been through – the flight from war and now this. It was heartbreaking, to see people who have travelled so far have to queue up in the mud for food.

“I can’t believe this is happening in my country. I’m very moved by the plight of these refugees and migrants. They’re human beings who need our help. You see their pain, you see that they just need our assistance.

“I don’t know how long we can cope. We’re a small country of two million people. We have our own economic crisis. It depends on what happens in other countries and if the numbers keep rising.”