Afghan refugees to Europe is still on the rise

“There is no peace in my country,” says Ahmed, sitting on a Belgrade park bench with a group of young men – all refugees from Afghanistan and its borders.

The park, which is across from Belgrade’s bus station, looks like any other leafy urban park on a Wednesday morning. Autumn leaves are turning and a steady flow of locals wander through with their shopping and children. But in the background, pockets of war-weary refugees gather, wondering where to go next, after a twelve hour journey from Macedonia.

Ahmed’s unlikely band of brothers include a medical student, an interpreter and an uncle with his 15 year old nephew and friend. Ahmed, himself, is a social science student, or was, until he had to leave. 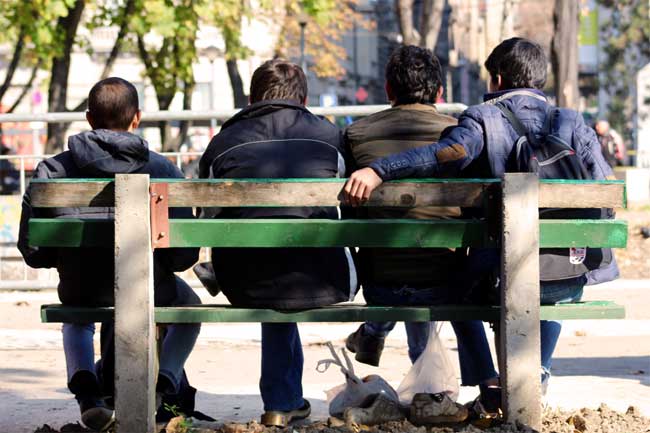 Afghan refugees on a park in Belgrade. Numbers of Afghan entering Europe make up twenty per cent of all refugees. Photo by Meabh Smith/Caritas

“People are getting killed at home,” says Ahmed. “I had to escape and leave my education. I have been travelling for three months through Iran, Turkey, Bulgaria and now Serbia. Bulgaria was the worst time. I spent three days sleeping in the forest, with no food or water.

“Three months ago when I left my family, my mother and father cried. They are old and aren’t working. My brothers work for European companies but the Taliban keep telling them to leave their jobs.

“I won’t obey the Taliban. They’ve destroyed our country, our education, everything.”

For a decade, Afghans have been the largest source country for refugees in the world, but this was overtaken by Syrian refugees in 2014. Yet, the numbers of Afghan entering Europe is still on the rise, making up twenty per cent of all refugees.

The escape to Europe has been particularly hard on the younger boys in the group. “My parents told me to come here because they make young boys become soldiers at home,” says the youngest member, an innocent-faced 13 year old boy. He cried every day in Bulgaria, where he was kept in a refugee camp for 22 days, followed by three days sleeping rough in a forest. His money and phone were stolen.

“In Afghanistan there is no work, no schools, no hospitals,” says his 15 year old friend. “When we travelled across the border through Iran, we were shot at. One boy got wounded and had to stay behind in the mountains.”

They’re hoping to reach Norway where they hear “they give shelter to young people” and to be eventually reunited with their parents.

“Everyone misses their families,” says Mohammad (26), who was an interpreter. “The Taliban are threatening my family every day but I couldn’t bring them here with me right now. How could my wife and child walk and do this journey? I want to apply for political asylum and bring them here to save their lives. They are in a bad situation right now.”

The group is taken to a refugee aid centre up the street for food and a change of clothes. The next stop is Croatia, where a day later they meet the Caritas team at the Berkasavo border crossing and are given food and water.

“Everyone has his own wish,” says Ahmed, with onwards plans ranging from France to Germany. “Inshallah, I will go to Belgium and if peace comes, I will go home”