Caritas is appealing for funds help build farmers’ and communties’ resilience to drought in response to food shortages in Ethiopia.

The number of people needing emergency food assistance is 8.2 million following a period of drought and erratic rains which have affected harvests. Caritas will launch a €2.9 million (ETB 66,643,952.00) emergency programme will help almost 500,000 people either directly or indirectly for the whole of 2016. 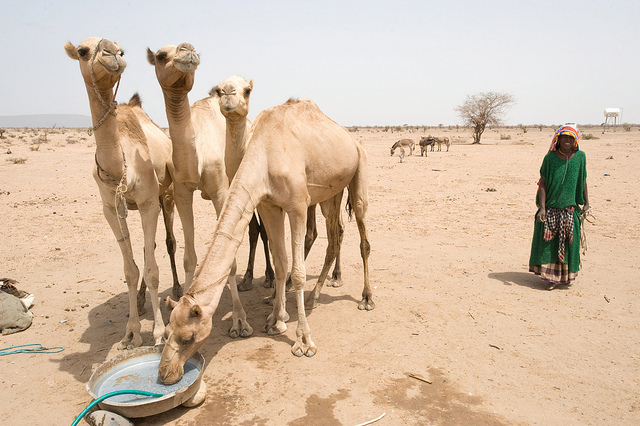 A local woman brings her camels to drink at a water point built by CRS in the arid Shinele Zone of eastern Ethiopia. Photo by David Snyder for Catholic Relief Services

“Caritas wants to get to the root of the food shortage by giving communities emergency support and skills to respond to disasters such as drought,” says Bekele Moges, Director of Caritas Ethiopia (Ethiopian Catholic Church Social and Development Commission).

“There is a desperate need for nutritious food for children under five and mothers, seeds for the next season and clean drinking water and hygiene initiatives across hard hit dioceses. A key part of our work will focus on giving farmers emergency support by improving access to cereal seeds and roots crops and providing access to livestock and feed which will help them survive the droughts.

The Caritas emergency programme for next year will focus on: providing households with improved seeds, livestock and animal feed and training; giving communities access to drinking water and ensuring children under 5 and pregnant and breastfeeding women have nourishing food.

Recurring disasters means that communities lose livestock and crops but also farmers sell what small assets they may have to buy food to cope with droughts and floods, leaving them even more vulnerable.

A prolonged drought is predicted in the North and West of the country and potentially serious flooding in the Southern Rangelands.