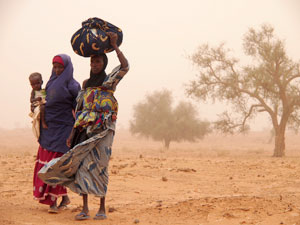 Create a climate of Change
What will tip the climate balance? Watch Development and Peace’s clever 45 second clip on how to “Create a Climate of Change” (Eng)

A lesson in climate resilience in Mongolia
Dzud: a Mongolian term for a severe winter in which large number of livestock die, primarily due to starvation due to being unable to graze, in other cases directly from the cold. See how Caritas Mongolia and Secours Catholique help people adapt (in French): Watch the video.

The Pope’s call for mobilisation
Pope Francis has called on everyone to protect Mother Earth and to act against interests which are “global but not universal” and which continue to destroy creation.

Catholic bishops statement in Lima on the road to Paris (from COP20).

Spirituality: how can our faith inspire us to change?

Laudato Si’ encyclical on climate change
In June 2015 Pope Francis wrote a letter to invite everyone to participate in a conversation about to see how “All of us can cooperate as instruments of God for the care of creation, each according to his or her own culture, experience, involvements and talents.” Read Laudato Si’.

Caring for Creation
Cardinal Peter Turkson talks about the Biblical roots of caring for creation.

Want to do something to help?

Personal change – For any change to be far-reaching and long-lasting it needs to start with us. “A change in lifestyle could bring healthy pressure to bear on those who wield political, economic and social power.”

March with Caritas – Dozens of countries around the world will march to urge leaders to take climate actions ahead of COP21. Click here to see if Caritas is marching in your country and how to join them.

Send – Caritas member organisations are invited to use this letter to send to their Members of Parliament and COP21 representatives. Download: Spanish, English, French.

Find out why COP21 is important and why Caritas will be there here. Read FAQs.
Why does the work of a lot of Caritas organisations focus on climate change? Read.
Is it possible that global warming is part of the world’s evolution? Read some common myths around climate change here.